Guidance on the International Symbol of Accessibility

The U.S. Access Board provides the following guidance on use of the International Symbol of Accessibility (ISA) under the Americans with Disabilities Act (ADA) and the Architectural Barriers Act (ABA). This guidance explains how use of a symbol other than the ISA may impact compliance with standards issued under the ADA and the ABA.

The International Symbol of Accessibility (ISA) 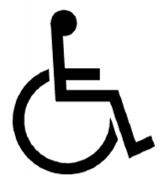 Created in 1968 through a design competition by Rehabilitation International and adopted by the International Organization for Standardization (ISO), the ISA has served as a global icon for accessibility for almost 50 years. The ISO is an independent, non-governmental organization that represents over 160 national standard-setting entities and develops voluntary, consensus-based, international standards. As part of an ISO standard (ISO 7001 Graphic Symbols – Public Information Symbols), the ISA reflects considerable analysis by, and the consensus of, an international collection of technical experts.

The ISA continues to be recognized worldwide as a symbol identifying accessible elements and spaces. Standards issued under the ADA and ABA Standards reference and reproduce the ISA to ensure consistency in the designation of accessible elements and spaces. Uniform iconography promotes legibility, especially for people with low vision or cognitive disabilities. In addition, various codes and standards in the U.S. also require use of the ISA. They include the International Codes Council’s International Building Code and ICC A117.1 Standard for Accessible and Usable Buildings and Facilities, the National Fire Protection Association’s NFPA 5000 Building Construction and Safety Code and NFPA 170 Standard for Fire Safety and Emergency Symbols, and the Federal Highway Administration’s Manual on Uniform Traffic Control Devices for Streets and Highways, among others.

Use of the ISA Under the ADA

Use of the ISA Under the ABA

Standards issued under the ABA apply to facilities designed, built, or altered with federal funds or leased by federal agencies. The ABA Standards are implemented by the Department of Defense, the Department of Housing and Urban Development, the General Services Administration, and the U.S. Postal Service. Like the ADA Standards, these standards mandate use of the ISA to label or provide direction to certain accessible spaces and elements (§F216 and §703.7.2.1).

Use of a symbol other than the ISA is permitted under the ADA Standards only if it satisfies the equivalent facilitation provision and under the ABA Standards only if a waiver or modification is issued. Otherwise, where the ADA or ABA Standards require accessible spaces or elements to be identified by the ISA, the ISA must be used even where a state or local code or regulation specifies a different symbol. Those who are interested in implementing an alternative symbol of accessibility are encouraged to contact the ISO’s Technical Committee 145 on Graphic Symbols which maintains the graphic symbol standards.