This guide explains requirements in the ADA Standards for protruding objects.

To prevent hazards to people with vision impairments, the standards limit the projection of objects into circulation paths. These requirements apply to all circulation paths and are not limited to accessible routes. Circulation paths include interior and exterior walks, paths, hallways, courtyards, elevators, platform lifts, ramps, stairways, and landings. 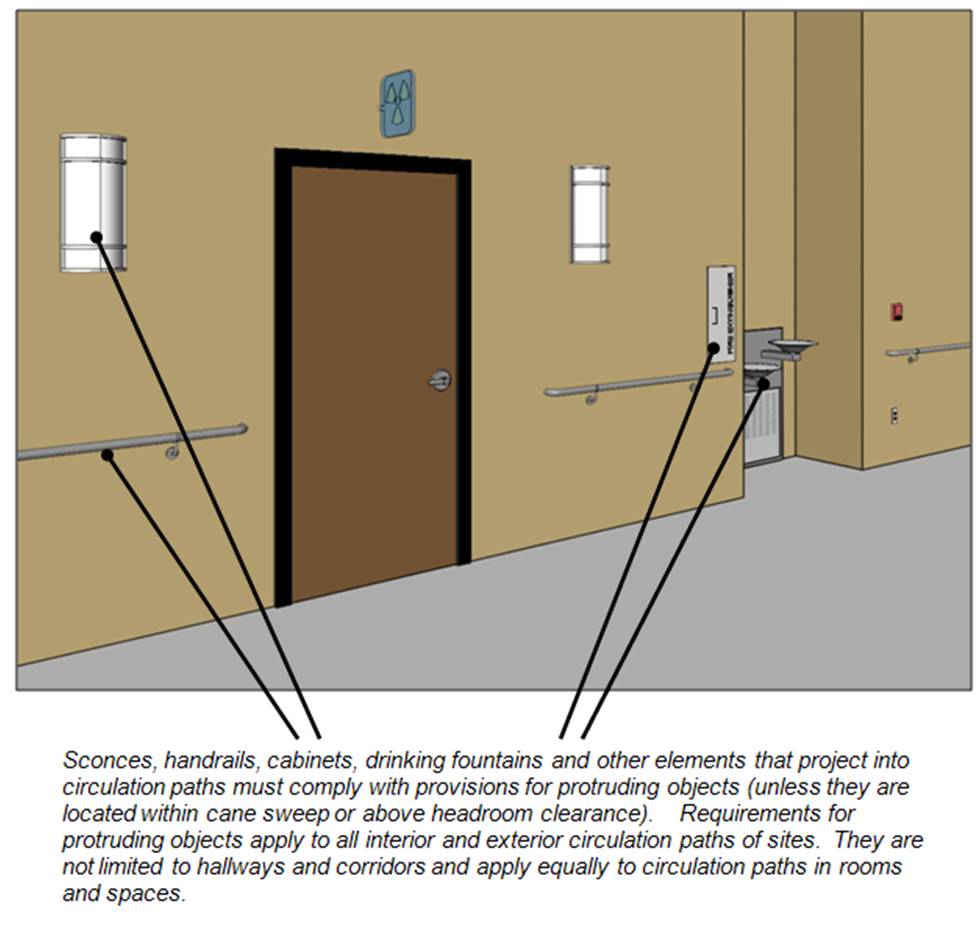 People with vision impairments often travel closely along walls which can provide wayfinding cues sometime called a “shoreline.” Objects mounted on walls, partitions, columns, and other elements along circulation paths can pose hazards unless their projection is limited. Those with leading edges that are within cane sweep (27″ high maximum) or that provide minimum headroom clearance (80″ minimum) do not pose hazards and can protrude any amount. 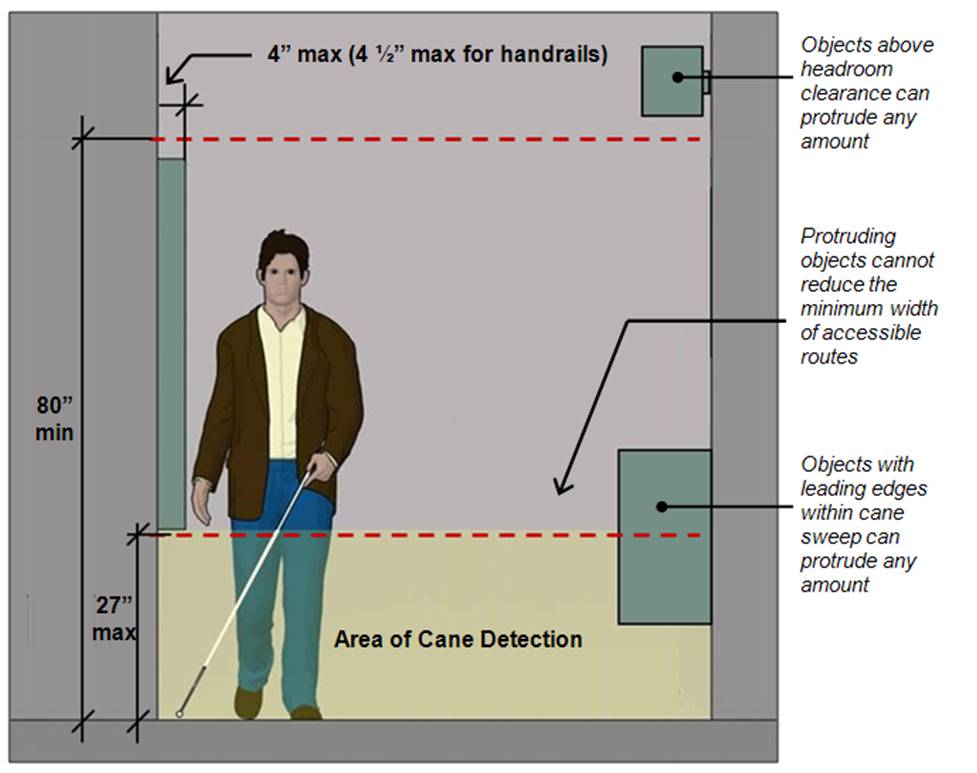 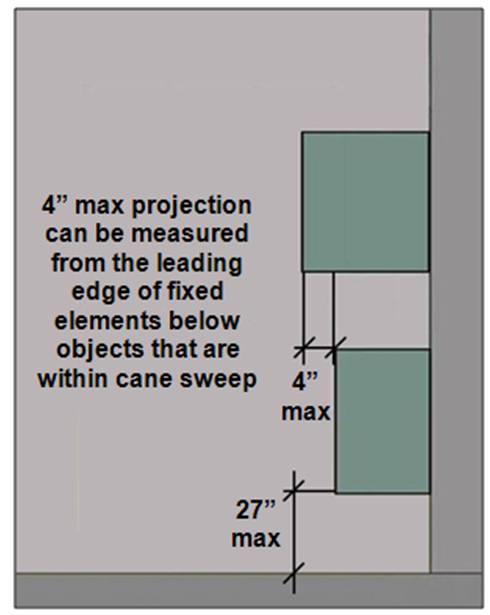 Objects located above elements that are within cane sweep can protrude 4″ maximum from the leading edge of such elements provided that any required reach or clear floor space is not obstructed.

Side Partitions and Wing Walls 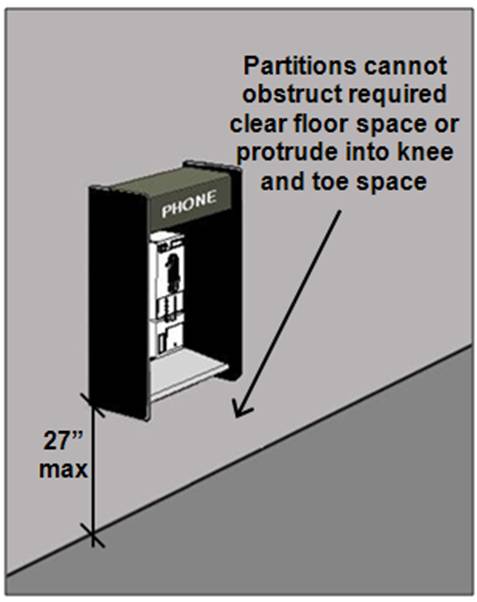 Side partitions or panels and wing walls can also be used to make protruding objects compliant. The bottom edge of panels or partitions must be 27″ high maximum.

Objects can be recessed in alcoves so that they do not project more than 4″ into circulation paths. Alcoves must be sized to accommodate required clear floor space at accessible elements. 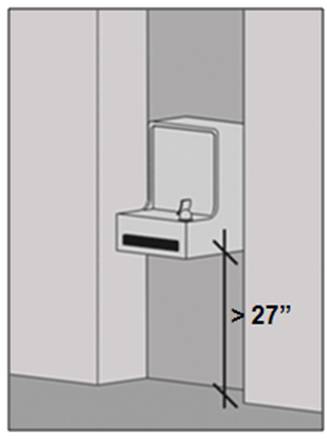 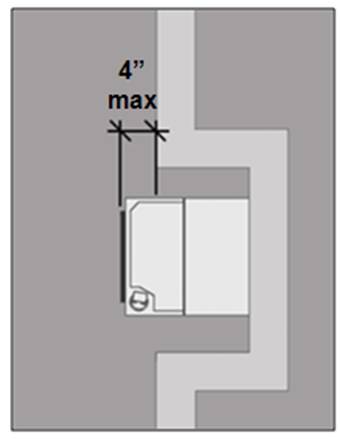 Elements, such as wheelchair accessible drinking fountains, must provide a knee clearance of at least 27″. If located to provide, but not exceed this clearance (27″ above the floor or ground absolute), they are not protruding objects because the leading edge will be within cane detection. 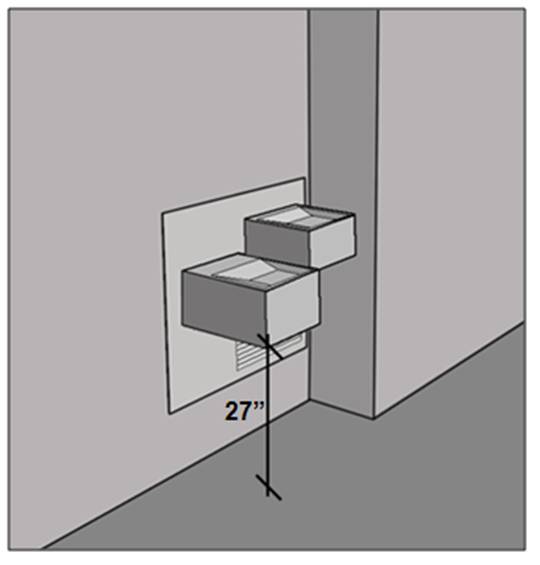 A wheelchair accessible unit located 27″ absolute above the ground or floor is cane detectable and can be used to enclose one side of high units for standing access. In this instance, the 27″ height is effectively an absolute dimension because it is the minimum required for knee clearance and the maximum specified for cane detection.

Free-standing objects with leading edges 27″ to 80″ high that are mounted on posts or pylons cannot protrude more than 12″ into circulation paths. The 12″ limit also applies to the clearance between multiple posts (excluding the sloping portions of handrails). 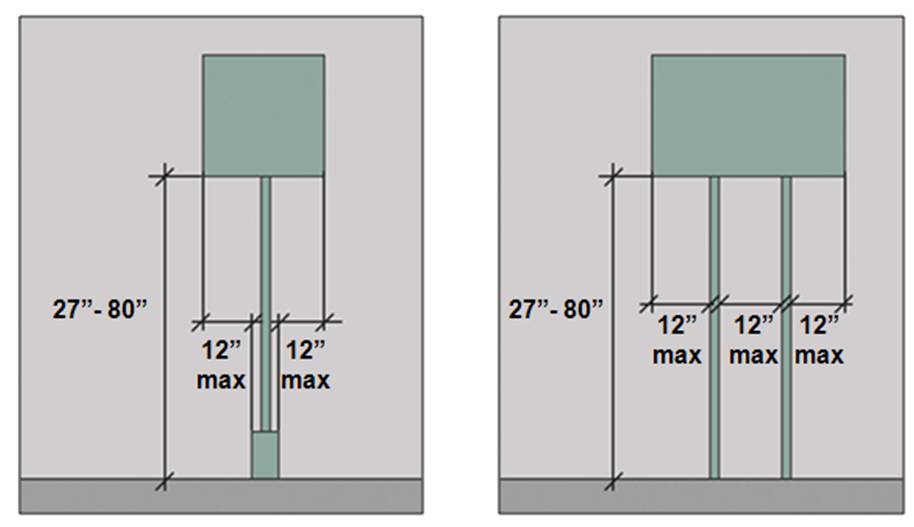 Objects with leading edges 27″ maximum or above 80″ can protrude any amount from posts or pylons. 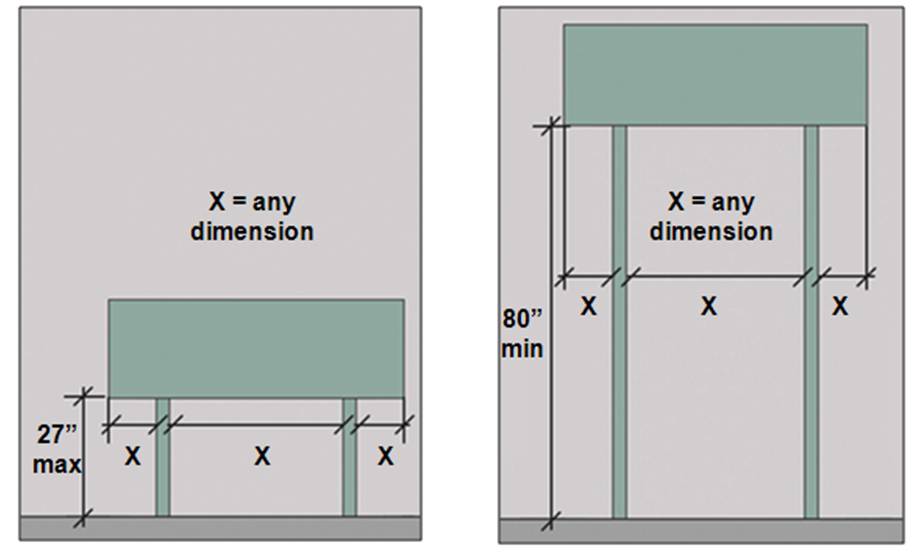 Headroom clearance of at least 80″ high is required along all circulation paths (except at doors and doorways where a 78″ minimum clearance is permitted to accommodate door stops and closers).

Fixed barriers, such as guardrails, are required where the vertical clearance is less than 80″ such as at open stairways and along sloped or curved walls. Barriers must have leading edges no higher than 27″ so that they are within cane sweep. Fixed planters, benches, and other elements can be used instead of guardrails. 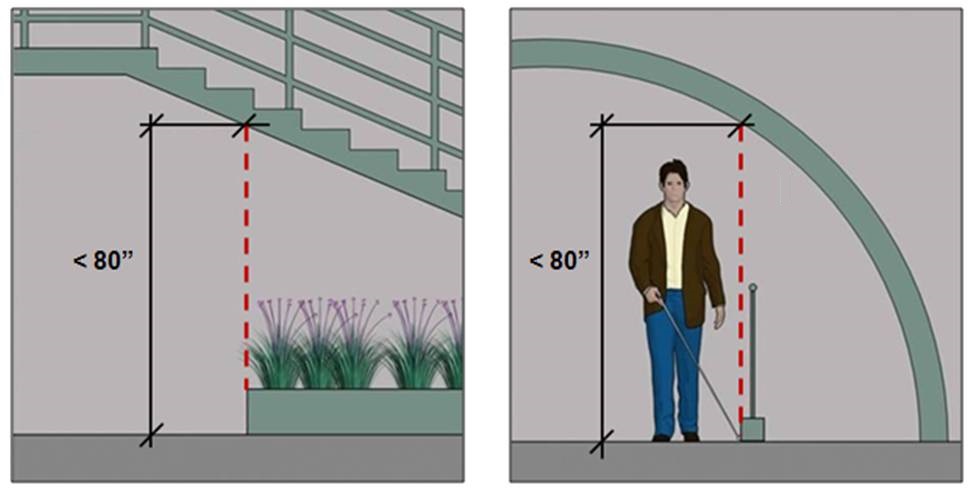 Recommendation:  A minimum height is not specified for barriers demarcating areas with less than 80″ of vertical clearance. It is recommended that barriers be high enough so that they are not mistaken for a step or other change in level and do not pose a tripping hazard.

Are requirements for protruding objects limited to hallways and corridors?

Cantilevered units at standard heights for people who stand must be recessed or protected as protruding objects. This is not required for wheelchair accessible units with no more than a 27″ clearance below (the minimum required for knee clearance and the maximum recognized for cane detection).

Can curbs be used to indicate areas with less than 80″ of vertical clearance?

The standards specify a maximum height (27″) for the leading edge of barriers so they are within cane sweep, but a minimum height is not specified. Curbs may be mistaken for a step or change in level, instead of a barrier. For this reason, barriers significantly higher than a curb or riser, such as a guardrail, planter box, bench, parapet wall, or similar elements are recommended.