This guide explains requirements in the ADA Standards for drinking fountains.

Where drinking fountains are provided, access is required for both people who use wheelchairs and for standing persons. This dual access must be provided on each floor of a facility equipped with drinking fountains, as well as an exterior site and each secured area of a building where drinking fountains are provided. Where one unit is planned in any of these locations, at least two units or a combination high-low unit must be provided for dual access in each such location. If multiple units are planned on a floor, exterior site, or secured area, then 50% must be wheelchair accessible and 50% accessible for standing persons (rounding up for either type in the case of odd numbers). 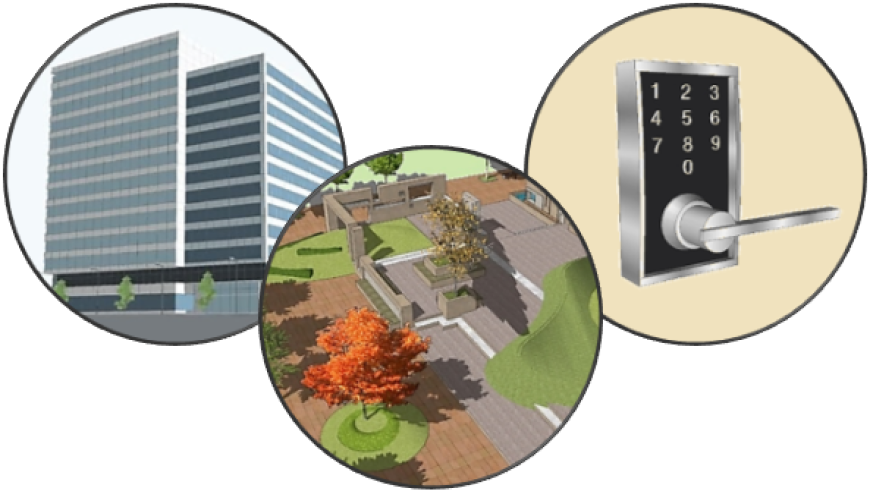 Scoping for drinking fountains applies separately to each floor of a facility, secured area, and exterior site that contains drinking fountains. In each such location with drinking fountains, half of the units must be wheelchair accessible and the other half accessible for standees. If only one unit is planned in any of these locations, at least two separate units or a combination high-low unit is required for dual access.

Recommendation:  Where multiple units are provided on a floor, exterior site, or secured area, provide both wheelchair and standing access at each location for greater convenience, especially if units are separated by significant distances. 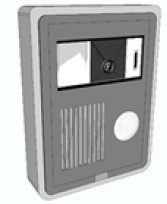 The Standards specifically address access to drinking fountains located within secured areas because they often serve only a portion of a facility's occupants. The term "secured area" is intended to apply to any space where entry is restricted or controlled. Levels of security can range from rooms entered only with an access card to high-security environments such as holding areas of prisons and jails. (In detention and correctional facilities, units that only serve inaccessible housing or holding cells but not accessible cells are exempt (§211.1, Ex).)

When provided, fixed or built-in water coolers and bottle fillers must meet requirements for operable parts (§309), including:

Provisions for wheelchair accessible units require access for a forward approach and address spouts, water flow, and operable parts. Units can be wall mounted or free-standing. 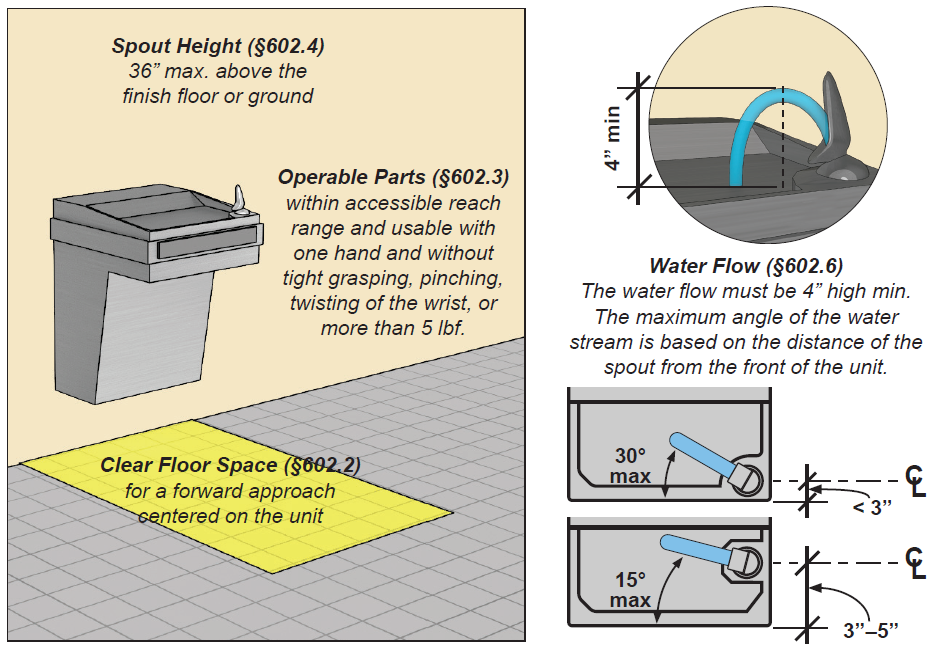 Spouts must be 15″ minimum from the vertical support and 5″ maximum from the unit's front edge, including bumpers.

Clear floor or ground space for a forward approach must be centered on the unit. Additional clearance is required if the space is obstructed on both sides for more than half the depth, such as at alcoves. 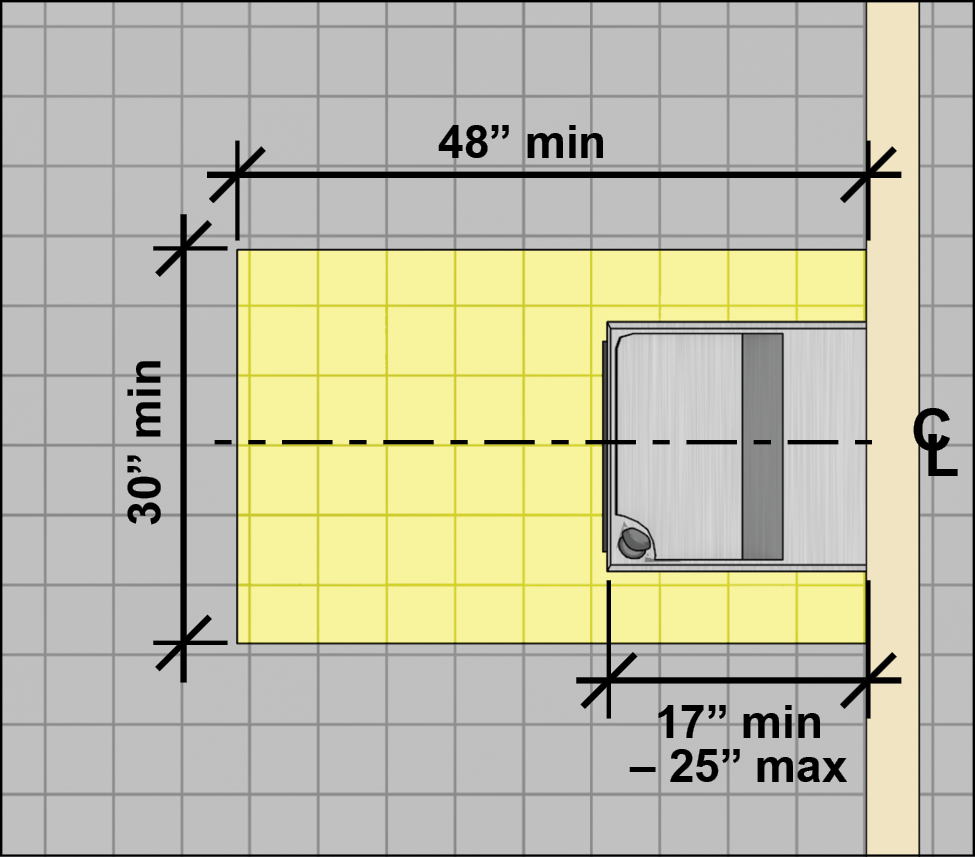 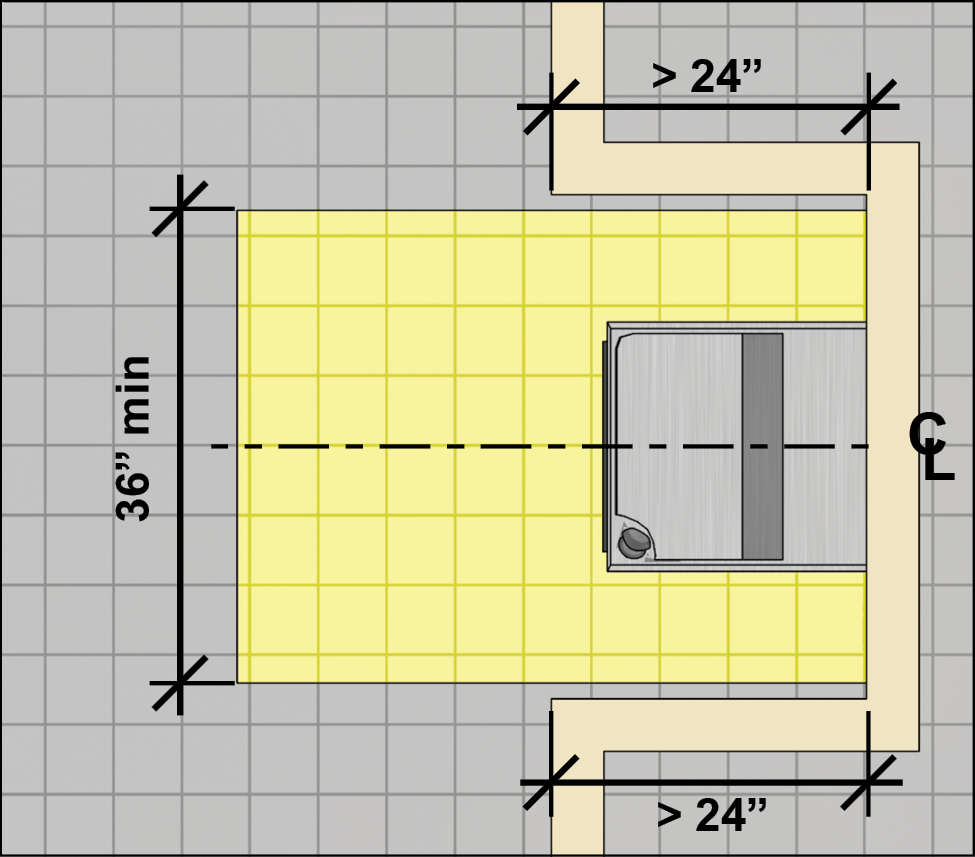 Knee and toe space is required below the unit. The combined depth of the knee and toe space must be at least 17″ (and 25″ maximum) measured from the leading edge of the unit, including bumpers. 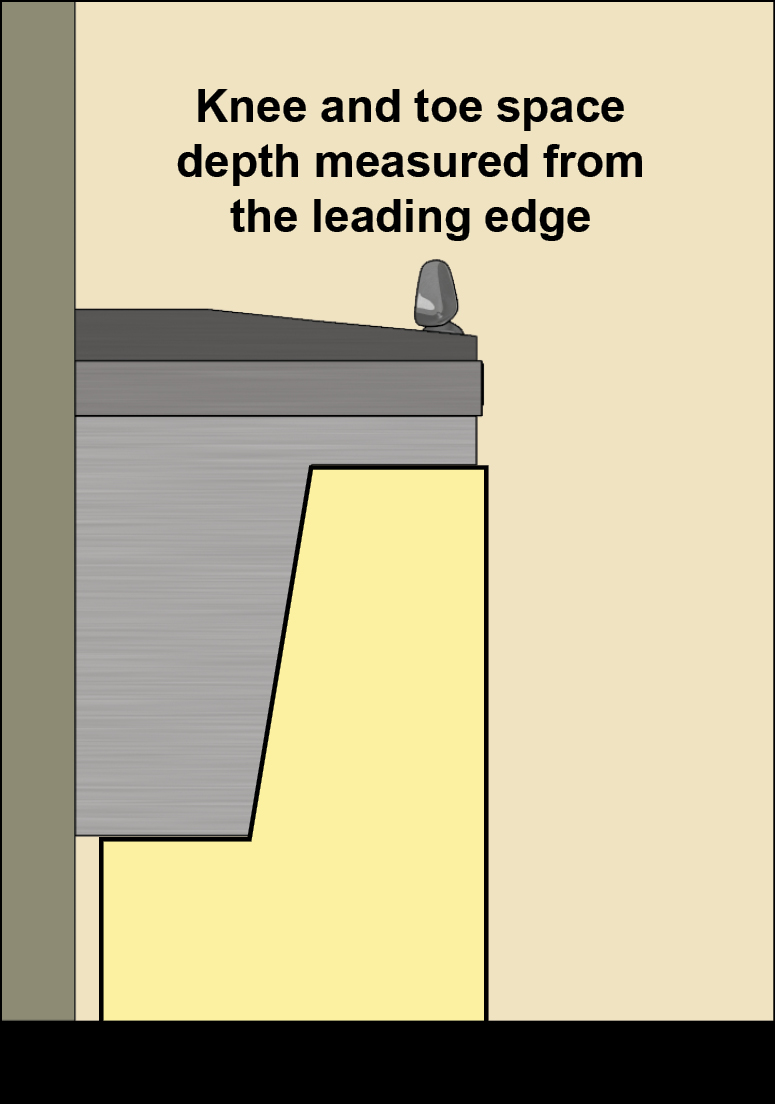 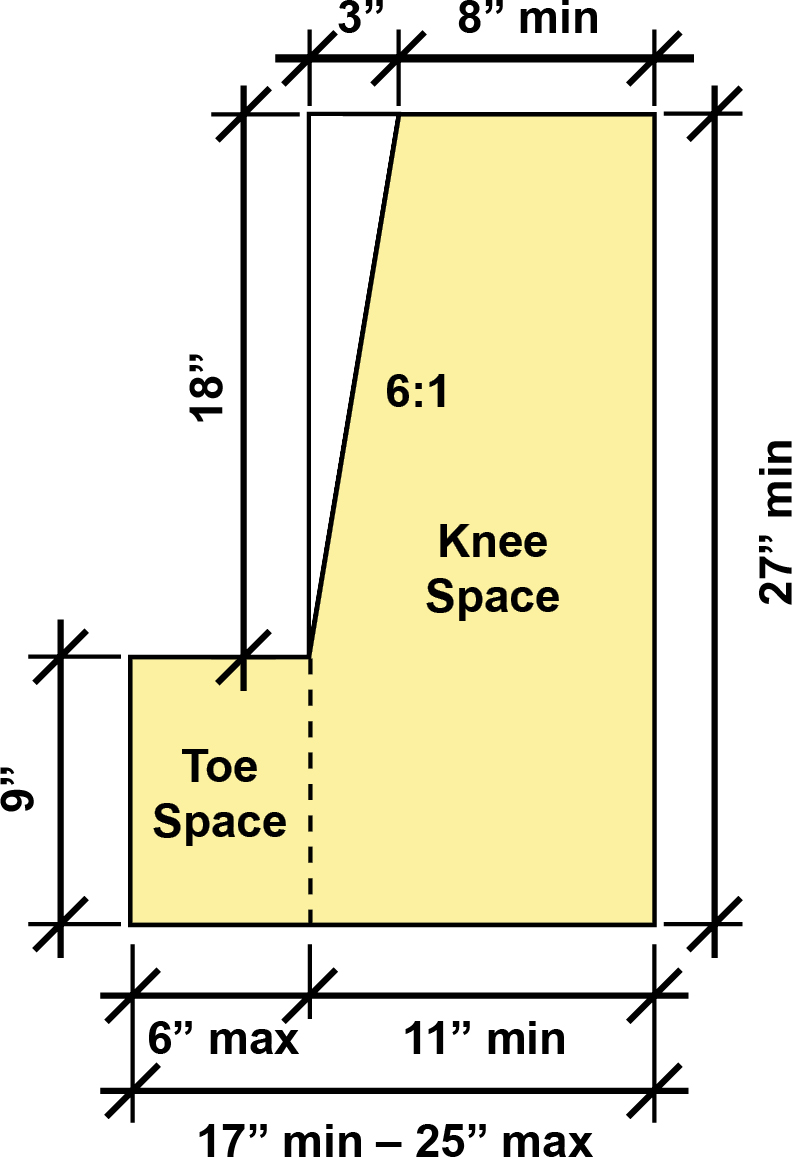 Drinking Fountains for Children’s Use

Drinking fountains designed specifically for children ages 12 and younger can provide a parallel approach instead of a forward approach if the spout is 30 inches high max and no more than 3 1/4 inches from the front edge of the unit, including bumpers (§602.2, Ex). Parallel clear floor space is not required to be centered on the unit." 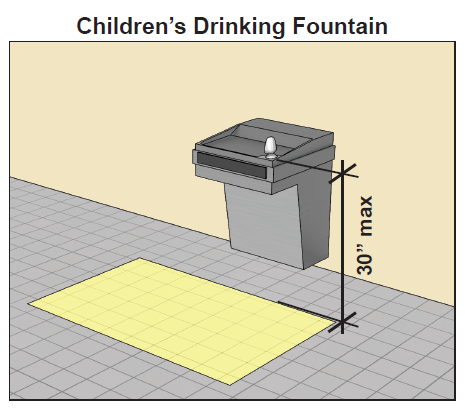 Drinking fountains for standing persons must have spouts 38″ to 43″ high and compliant operable parts and be located on an accessible route. They cannot obstruct the forward approach clearance, including knee and toe space, required at wheelchair accessible units. 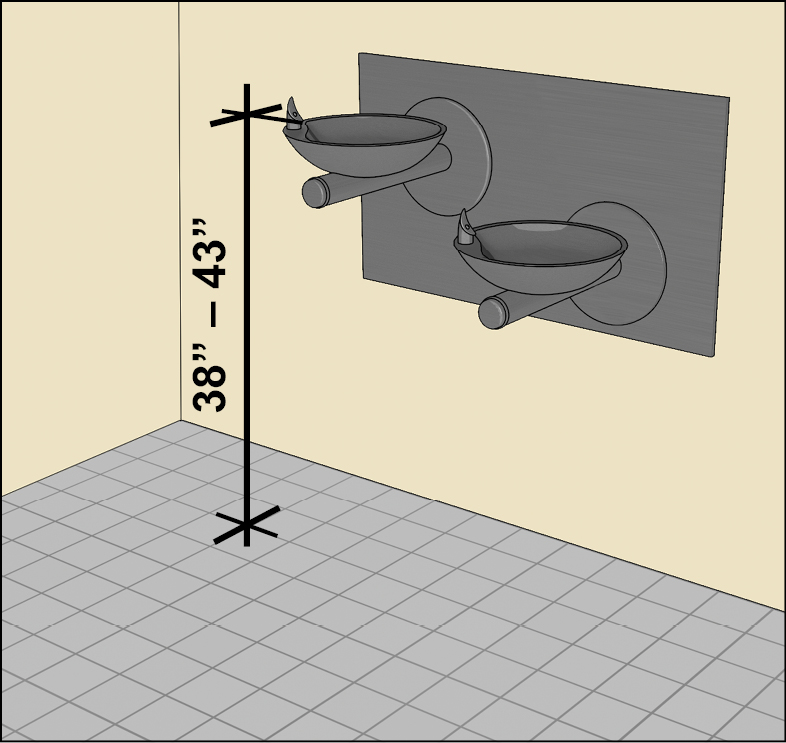 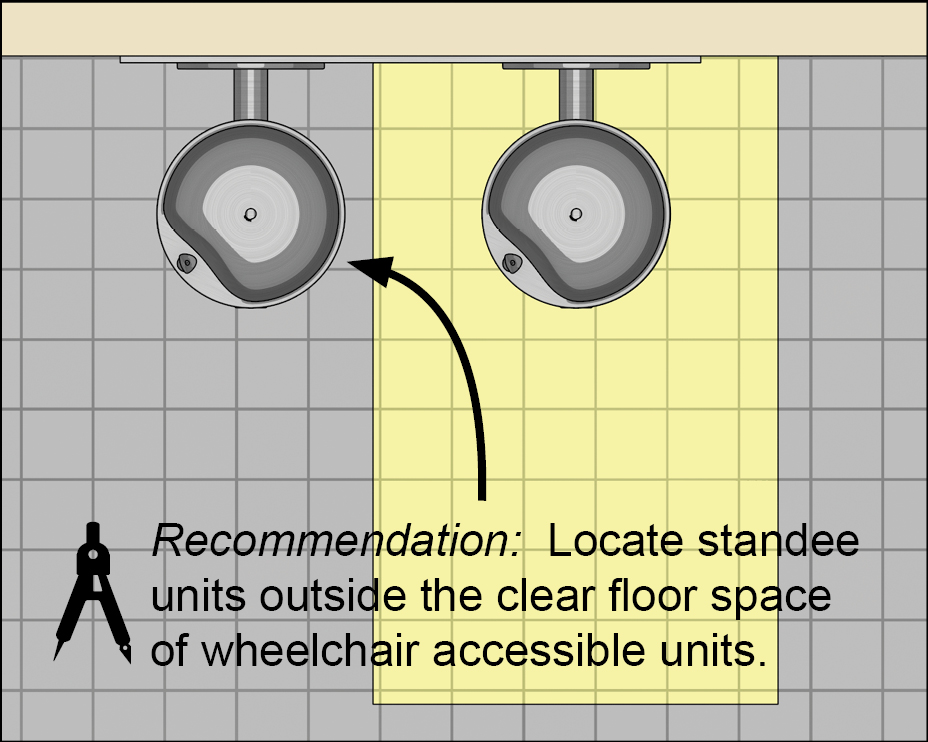 Recommendation:  Although cantilevered units for standing persons with knee and toe space can overlap the clear floor space of adjacent wheelchair accessible units, it is better to locate them outside this clear floor space so that they do not impact access to low units.

Requirements for protruding objects (§307) apply to drinking fountains. Drinking fountains with leading edges higher than 27″ must be recessed in alcoves or otherwise treated so that they do not protrude more than 4″ into circulation paths. Alcoves must be sized to accommodate the clear floor space required at wheelchair accessible units. 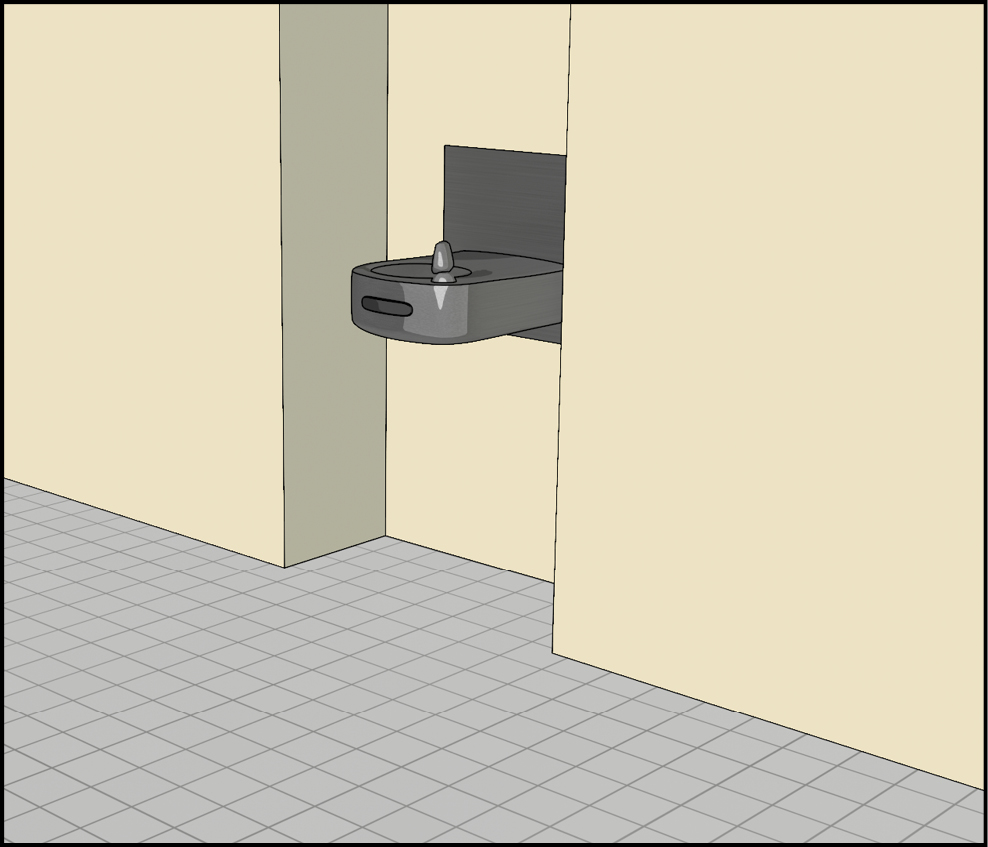 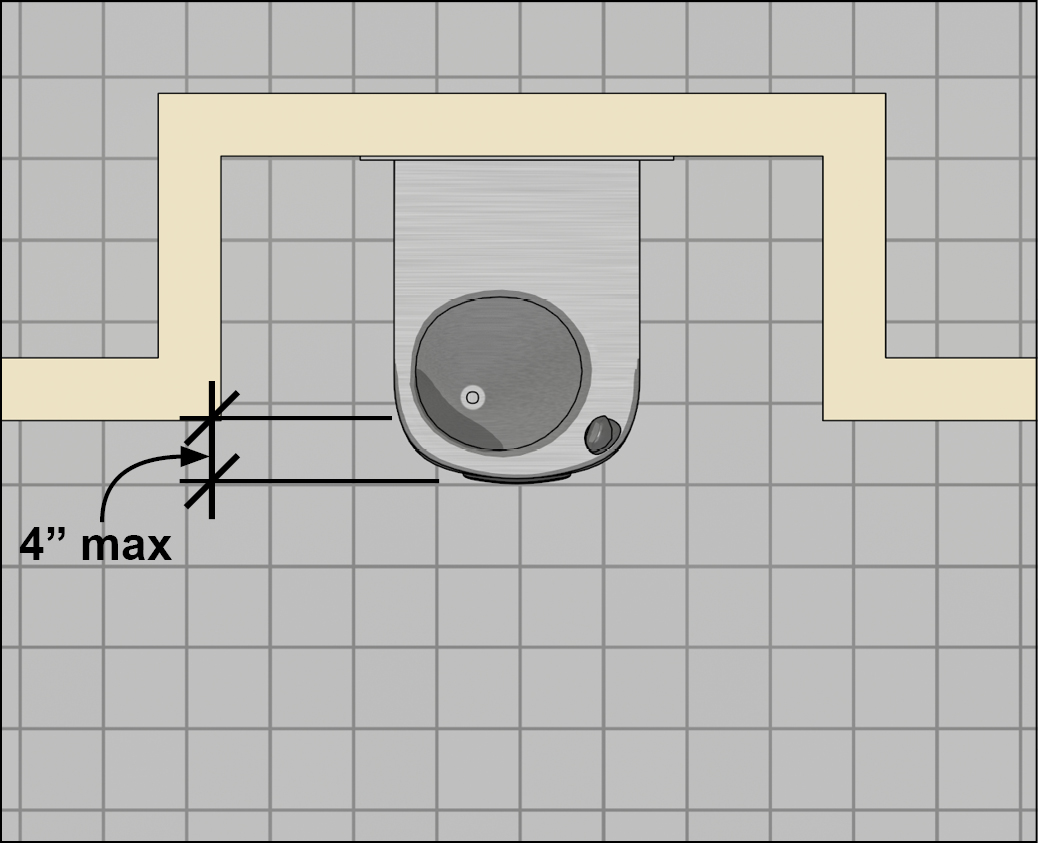 Wheelchair accessible units that provide, but do not exceed, the 27″ minimum knee clearance do not require treatment as a protruding object because the leading edge is at the maximum limit for cane detectability. Such units can be used to enclose one side of cantilevered units for standees. Other fixed objects, such as benches and planters, can be used to recess drinking fountains. 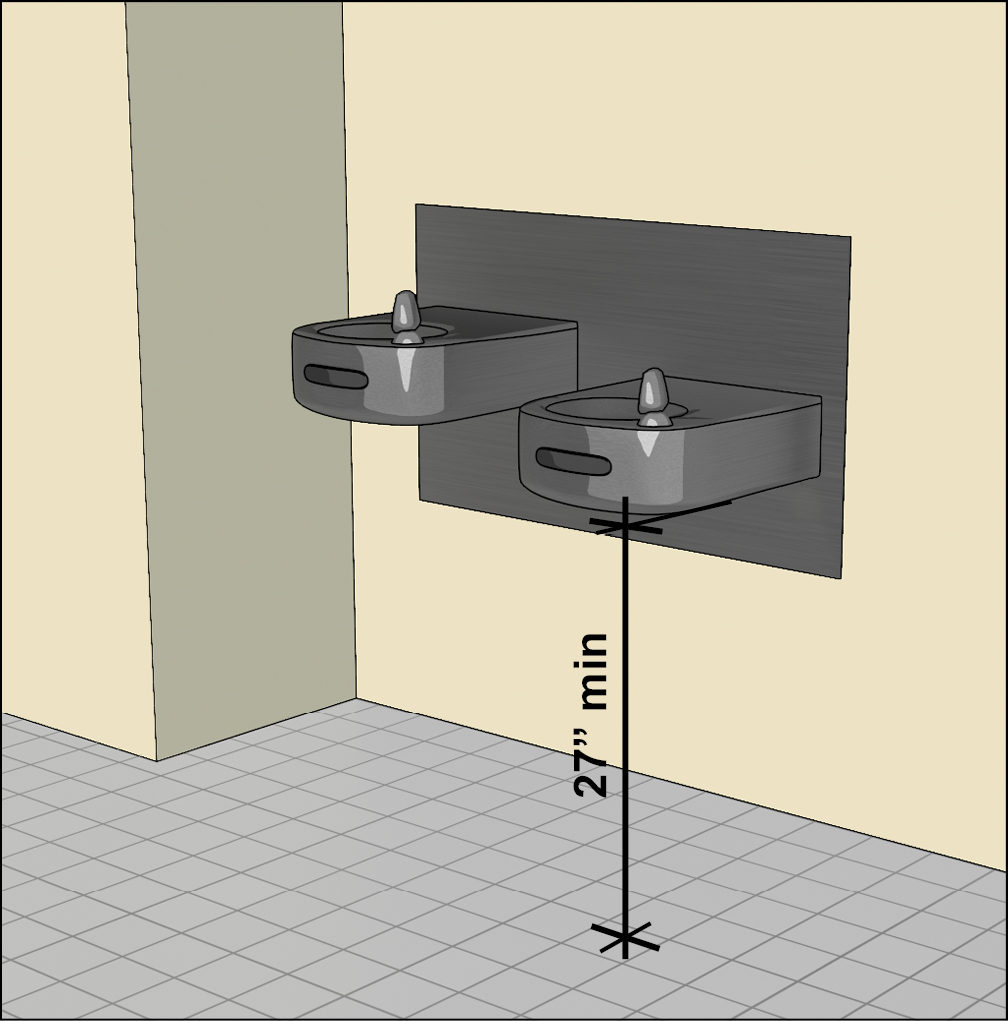 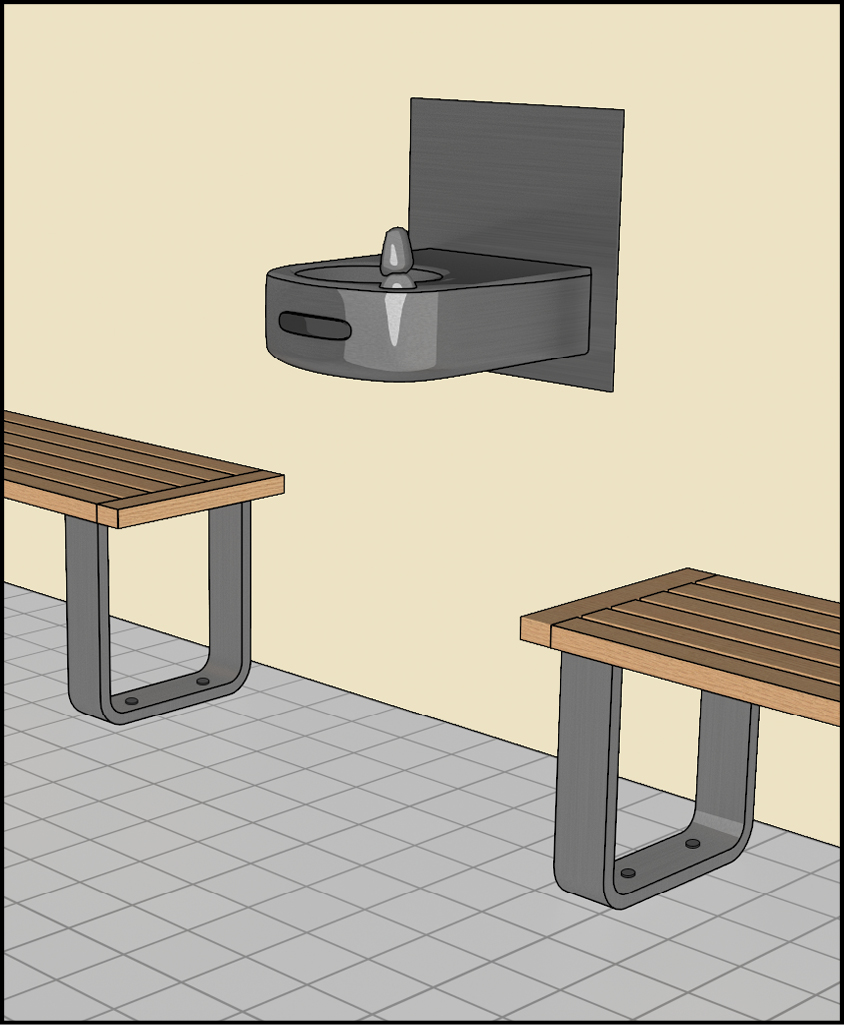 When must drinking fountains be designed for use by children?

The Standards do not specify where units must be mounted or designed specifically for children. This determination is left to other building codes or regulations, good practice, client preference, or other factors. Instead, the Standards provide an exception that can be used when the decision is made to mount drinking fountains at heights for children ages 12 and younger. Under this exception, a parallel approach is permitted instead of a forward approach with knee and toe clearance in order to accommodate a lower unit height provided that the spout is no higher than 30″ and no more than 3½″ from the front edge of the unit, including bumpers (§602.6).

Do drinking fountains have to meet requirements for protruding objects?

Yes, the Standards limit the protrusion into circulation paths of those objects, including drinking fountains that have leading edges higher than 27″ above the finish floor or ground. Cantilevered units with leading edges higher than 27″ must be recessed or protected as protruding objects. Wheelchair accessible units with a 27″ absolute knee clearance below do not require treatment as protruding objects.

Units for standing access (or other elements) that do not have compliant knee and toe clearance cannot overlap or protrude into the clear floor space at adjacent wheelchair accessible units. Cantilevered units for standees with compliant knee and toe space can overlap the clear floor space at wheelchair accessible units but it is advisable to locate them outside the clearance since they can interfere with use of the lower unit when located in close proximity.