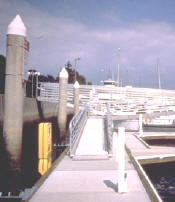 “Whenever any barrier stands between you and the full rights and dignity of citizenship, we must work to remove it, in the name of simple decency and justice. The promise of the ADA…has enabled people with disabilities to enjoy much greater access to a wide range of affordable travel, recreational opportunities and life-enriching services.”

The recreation facility guidelines described in this guide focus on newly designed or newly constructed and altered boating facilities. Other provisions contained in ADAAG address elements commonly found at a boating facility, such as accessible vehicle parking spaces, exterior accessible routes, and toilet and bathing facilities. ADAAG addresses only the built environment (structures and grounds). The guidelines do not address operational issues of a facility. Questions regarding operational issues should be directed to the Department of Justice, 1-800-514-0301 or 1-800-514-0383 (TTY).

Recreational boating facilities can include fixed and floating facilities. Facilities can vary in size from one boat slip (for example, at a small campground facility) to several thousand slips, and can handle boats ranging in size from small canoes to large sailboats and powerboats. Facilities may be located in the same waterfront area or even in the same site (such as a State park with a large lake) and include marinas, launching facilities, piers, and docks that are designed for recreational use. 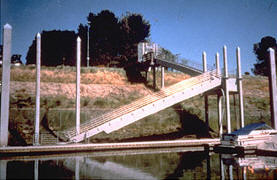 ADAAG requires that at least one accessible route connect accessible buildings, facilities, elements, and spaces on a site. Accessible boat slips, accessible boarding piers at boat launch ramps,and other accessible spaces and elements within a boating facility must also be connected by an accessible route. The accessible route must comply with ADAAG provisions for the location, width (minimum of 36 inches), passing space,head room, surface, slope (maximum of 1:12 or 8.33%), changes in level, doors, egress, and areas of rescue assistance, unless otherwise modified by specific provisions outlined in this guide.

Gangways designed for the least possible slope will provide more independent access for persons with disabilities. As a minimum however, gangways must be designed to provide for a maximum 1:12 (8.33%) slope but are not required to be longer than 80 feet in length. For example, if the vertical distance between where the gangway departs the landside connection and the elevation of the pier surface at the lowest water level is 10 feet, the gangway would have to be at least 80 feet long. As water levels rise and fall, gangway slopes also rise and fall. At times, this gangway slope may be less than 1:20 (5%) and at other times it may be more than 1:12 (8.33%). In smaller facilities with less than 25 boat slips, the slope of the gangway may exceed 1:12 (8.33%), if the gangway is at least 30 feet long.

The maximum rise requirements in ADAAG do not apply to gangways. As a result, no intermediate landings on the gangways are required and gangways may be any length.

The gangway slope and rise exceptions do not apply to other sloped walking surfaces that may be part of the accessible route. For example, where a non-gangway sloped walking surface greater than 1:20 (5%) is provided as part of an accessible route connecting accessible spaces of a boating facility, it must comply with ADAAG slope and rise requirements. This would include a ramp connecting a fixed pier or a float with fixed switchback ramps.

Gangways on existing boating facilities may be repaired or replaced without triggering the requirement to increase the gangway length. However, if the areas altered contain primary functions (such as a boat slip or boat dock), existing gangways are considered part of the path of travel to the altered primary function area and must be made accessible, if the cost to do so is not disproportionate. The Department of Justice has determined that it is not disproportionate to spend up to an additional 20 percent of the overall costs of alterations to the primary function areas to make the path of travel accessible. 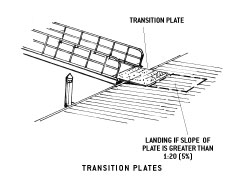 ADAAG addresses handrail height, diameter, and extensions provided to the end of the gangway. Other specifications regarding vertical supports are not addressed by ADDAG, but may be addressed in local building codes. Handrail extensions are not required where gangways and transition plates connect and both are provided with handrails. ADAAG does not require handrails on sloped surfaces that have a rise of less than 6 inches or a projection less than 72 inches, or a slope of 1:20 (5%) or less. Where handrail extensions are provided, they do not need to be parallel with the ground or floor surface, since the surface may be moving due to water conditions.

In addition to regular elevators, limited use/limited application elevators (smaller, slower elevators used for low-traffic, low-rise facilities) or platform lifts that comply with ADAAG may be used instead of gangways as part of an accessible route connecting floating piers.

A boat slip is the portion of a pier, main pier, finger pier, or float where a boat is berthed or moored, or used for embarking or disembarking. Where boat slips are provided, the number of boat slips required to be accessible must comply with the table shown to the right. In these guidelines, boarding piers that are not part of boat launch ramps are also classified as boat slips. For purposes of these guidelines, piers not typically thought of as providing boat slips where boats can be moored, such as a fuel pier, are also included in determining the total number of slips at the facility. 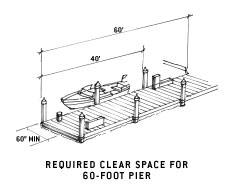 Accessible boat slips must be dispersed throughout the various types of slips a facility provides, but a facility does not have to provide more accessible boat slips than required in the table. Accessible slips may be grouped on one pier if the requirement for different types of slips is met. Types could include shallow-water or deep water; transient or longer-term lease; covered or uncovered; and whether slips are equipped with features such as telephone, water, electricity, or cable connections. 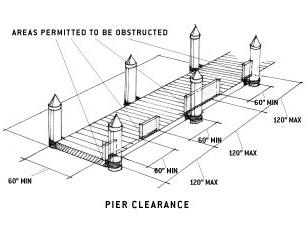 Accessible boat slips do not need to be marked and are not reserved in the same way as accessible vehicle parking spaces. For example, facilities should hold the accessible slips open for persons with disabilities until all other slips are filled. At that point, the slip may be made available for general use. For seasonal slip holders, accessible slips should be held until the expiration period for slip contracts has expired. Marina operators may choose to make information regarding accessible boat slips available in promotional material or a facility guide. Ensuring that accessible slips are available to persons with disabilities is an operational issue and operators should contact the Department of Justice for further information. 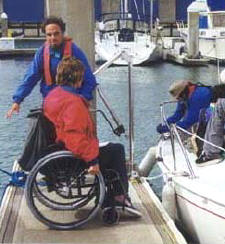 Accessible boat slips must have clear pier space at least 60 inches wide and as long as the slip. Providing more than 60 inches wide clear space will improve safety for people with disabilities, especially on floating piers. This space is the minimum necessary for individuals with disabilities to have sufficient space adjacent to their boat slip to use a chair lift or transfer device for getting on or off their vessel and provide a turning space for changing directions. Every 10 feet of linear pier edge serving the accessible slips must have at least one continuous clear opening that is at least 60 inches wide. There are three exceptions:

Cleats and other boat securement devices at accessible slips do not have to comply with ADAAG reach range requirements. However, clear space must be provided at each securement device and each device must be located on an accessible route. This reach range exception does not apply to other controls and operating mechanisms such as hose bibbs, water supply hoses, outlets for electrical power, telephones, or cable TV. 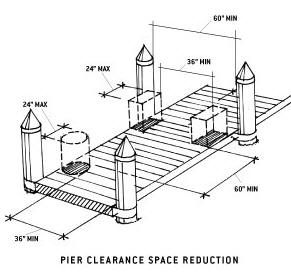 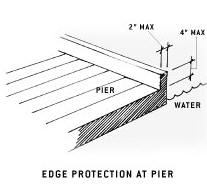 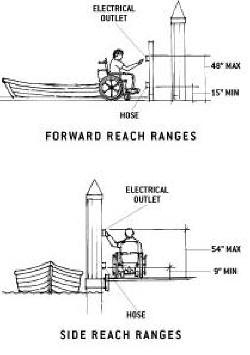 A boarding pier (sometimes called a courtesy pier or a launch dock) is the part of a pier where a boat is temporarily moored for embarking and disembarking. A boat launch ramp is a sloped surface designed for launching and retrieving trailered boats and other watercraft to and from a body of water. The provisions for boarding piers cover only those that are associated with boat launch ramps. Boarding piers that are not part of a boat launch ramp are classified as “boat slips” for purposes of these guidelines.

If boarding piers at boat launch ramps are provided, at least 5 percent but not less than one, must comply with these guidelines and be served by an accessible route. The exceptions for gangways, previously described above, may be applied to boarding piers (see Accessible Routes).

In addition, gangways connecting floating boarding piers may exceed the maximum slope specified in the guidelines, if the total length of the gangway is at least 30 feet.

ADAAG ramp requirements do not apply to the portion of the accessible route serving a floating boarding pier or skid pier if it is located within a boat launch ramp. For example, a facility provides a chain of floats on a launch ramp to be used as an accessible boarding pier. At high water, the entire chain is floating and a transition plate connects the first float to the surface of the launch ramp.As the water level decreases, segments of the chain rest on the launch ramp surface, matching the slope of the launch ramp. An accessible route must serve the last float because it would function as the boarding pier at the lowest water level, before it possibly grounded out. Because the entire chain also functions as a boarding pier, it must comply with all ADAAG provisions, including the 60 inch minimum clear pier width provision.

This table highlights the sections of the ADA and ABA Accessibility Standards discussed in the boating facilities guide.

* The guide uses the term ADAAG (Americans with Disabilities Act Accessibility Guidelines) as the basis of the requirements discussed. The recreational provisions of these guidelines were adopted into the 2010 ADA Standards without changes, so the ADAAG section numbers correspond to the same section numbers in the ADA Standards (as well as the Architectural Barriers Act (ABA) Accessibility Standards).