Additions, alterations, and leasing actions may require retrofit of existing elements. Existing elements that meet earlier editions of the ABA standards, such as the Uniform Federal Accessibility Standards, do not have to be modified to meet the current standards unless altered (§F203.2).

Additions and alterations undertaken at existing facilities are covered by the ABA Standards. The extent of application is largely determined by a project’s scope of work as the standards apply to those elements or spaces that are altered or added. Additional requirements apply to projects that affect or could affect the usability of, or access to, an area containing a primary function. The standards also require certain elements and spaces to comply in existing facilities leased by Federal agencies.

Projects that increase, expand, or extend a facility’s gross floor area or height of a facility are considered additions (as defined in §F106.5) and must comply with requirements of the standards applicable to new construction. However, existing elements and spaces affected by an addition are treated as alterations and qualify for certain allowances or exceptions that are not permitted in new construction.

Application of the Standards in Additions 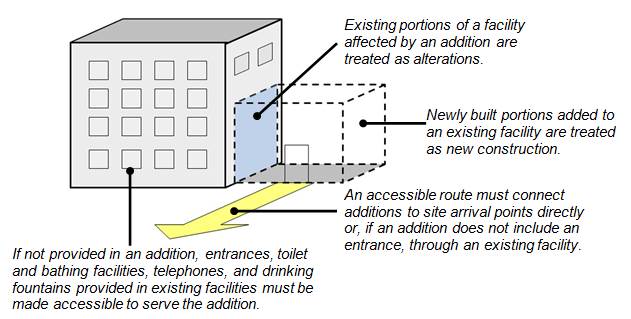 If not included in an addition, these elements and spaces must be made accessible in the existing facility, where provided: 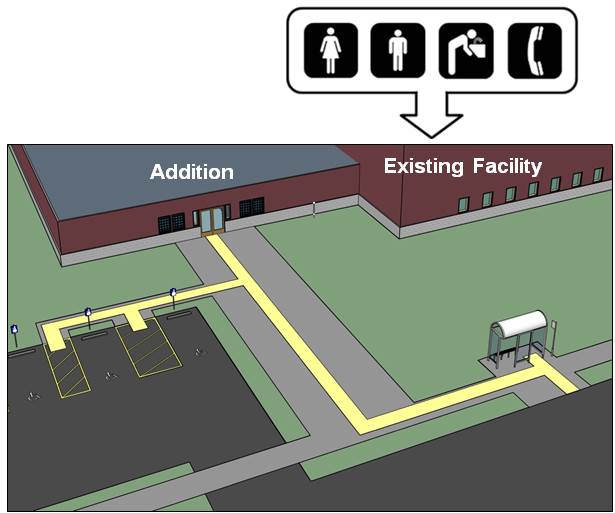 These requirements apply fully to all additions. Cost caps based on “disproportionality” are not recognized for additions (but are permitted for a path of travel to altered primary function areas).

Alterations are defined in the standards (§F106.5) as “a change in a building or facility that affects or could affect the usability of a building or facility or portion thereof.” Many types of projects are covered as “alterations”, including remodeling, renovation, rehabilitation, reconstruction, restoration, resurfacing of circulation paths or vehicular ways, and changes or rearrangement of structural parts, elements, or walls. Normal maintenance, reroofing, painting or wallpapering, or changes to mechanical and electrical systems are not considered alterations unless they affect a facility’s usability. For example, a project limited to an HVAC system that includes the addition of thermostats would affect a facility’s usability because it involves elements (operable parts) covered by the standards.

The standards ensure that the opportunities for accessibility presented by an alteration are taken. How and to what extent the standards apply is determined by the scope of a project and the elements and spaces altered. Only those elements or spaces altered are required to comply, but alterations made to areas containing a primary function (a major activity for which a facility is intended) also require an accessible path of travel.

Application of the Standards in Alterations 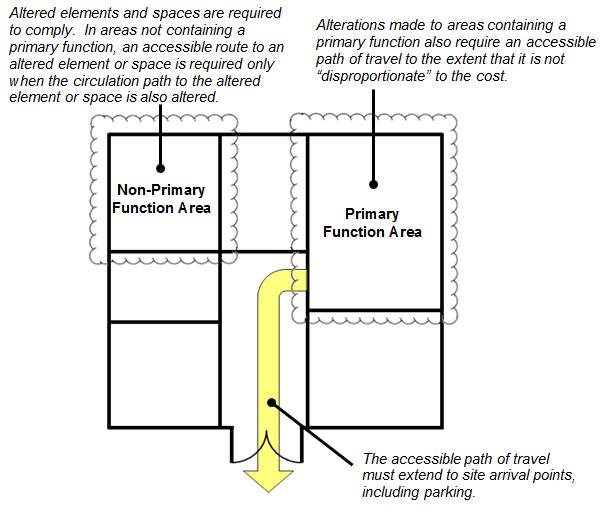 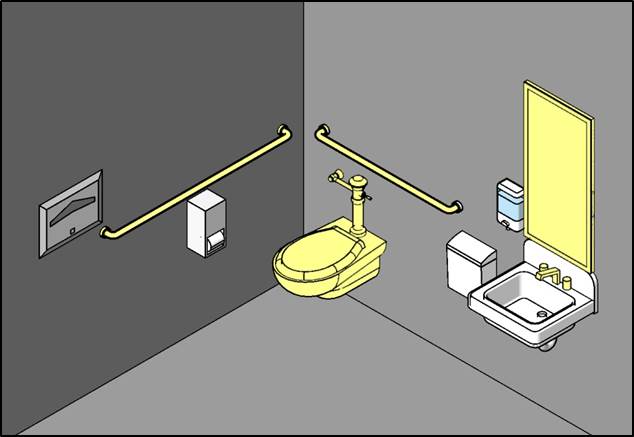 In a restroom project involving alterations to the toilet, grab bars, faucet controls, and mirror, the standards apply to these elements but not to those that remain unaltered. In more extensive projects where additional elements are altered, application of the standards is greater, commensurate with the scope of work.

Recommendation:  While only those elements altered are required to comply, it is advisable to maximize opportunities for accessibility in alterations. Alteration of multiple elements in a room or space may provide a cost-effective opportunity to make the entire room or space fully accessible. 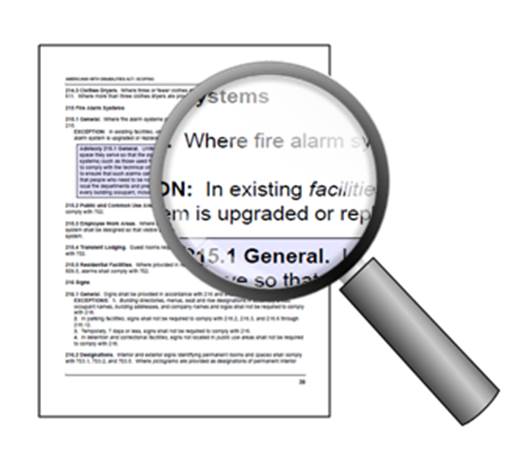 The standards apply the same requirements used in new construction to alterations but also include provisions unique to alterations. Some provisions clarify application, while others are structured as exceptions that limit coverage or relax technical criteria under certain conditions. Located throughout the standards at the relevant scoping or technical requirement, these provisions and exceptions are distinguished by references to “alterations” or “existing facilities.”

Vertical Access An accessible route to stories and mezzanines is required in alterations (or additions) where stairs or escalators are added where none existed previously and major structural modifications are necessary (§F206.2.3.1) (or as needed to provide an accessible path of travel to an altered primary function area if not disproportionate to the cost (§F202.4)), unless the building is exempt from the requirement for access between stories.

Elevators If elevators are altered, all cars programmed to respond to the same call control must be similarly modified (§F206.6.1).

Stairs Full handrail extensions at stairs are not required where they would project hazardously into circulation paths (§505.10, Ex. 3).

Compliance in an alteration is not required where it is “technically infeasible.” The term is defined as “something that has little likelihood of being accomplished because existing structural conditions would require removing or altering a load-bearing member that is an essential part of the structural frame; or because other existing physical or site constraints prohibit modification or addition of elements, spaces, or features that are in full and strict compliance with the minimum requirements.”

Where technical infeasibility is encountered, compliance is still required to the maximum extent technically feasible. 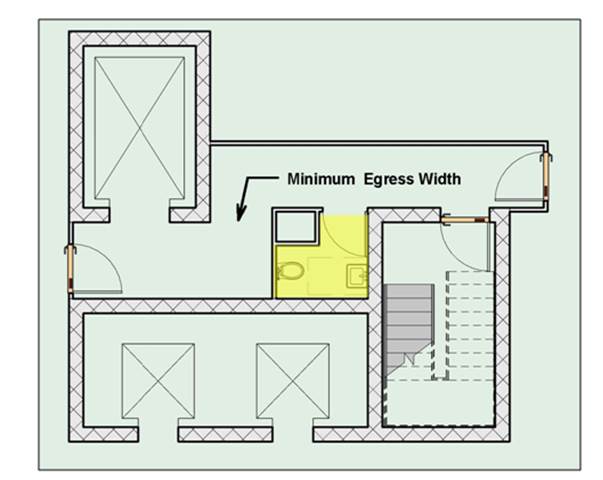 It may be technically infeasible in an alteration to enlarge a toilet room confined in size by structural supports, elevator shafts, mechanical rooms and chases, stairways, or required egress routes not affected by the project. In this case, the toilet room must be sized and other requirements, including those for plumbed fixtures, must be met to the maximum extent technically feasible. However, the concept of technical infeasibility remains relative to the planned scope of work. If the entire building is significantly renovated or gutted, constraints of this type would likely not exist.

Other examples where compliance could potentially be technically infeasible include: 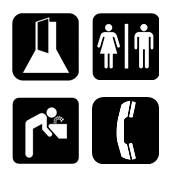 The accessible path of travel is required to the extent that it is not “disproportionate” to the total cost. Regulations and directives implementing the standards define “disproportionate” as exceeding 20% of the total cost of alterations to the primary function area. The 20% cap applies only to costs associated with the accessible path of travel, including an accessible route to the primary function area, entrances, and retrofits to restrooms, telephones, and drinking fountains.

Additional information on the requirements for alterations to primary function areas is provided in regulations and directives implementing the ABA standards.

Compliance is required up to the point the 20% cost cap is reached, even where it does not result in a fully accessible path of travel. Where costs exceed this cap, ABA standard-setting agencies recommend compliance in this order of priority: 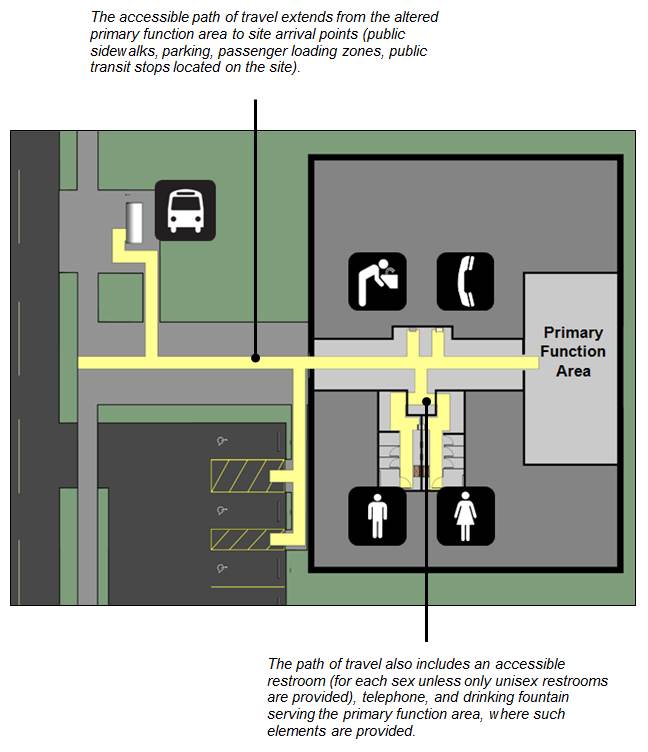 The standards contain specific provisions for qualified historic facilities which are defined as buildings or facilities that are “listed in or eligible for listing in the National Register of Historic Places or designated as historic under an appropriate State or local law.”

Like other existing facilities, the requirements for alterations apply in relation to the planned scope of work. Alterations provisions and exceptions, including those based on technical infeasibility, and requirements for path of travel to primary function areas, apply equally to historic facilities.

The standards also provide several exceptions where compliance with the standards would threaten or destroy the historic integrity or significance of a facility as determined by the appropriate State Historic Preservation Official or Advisory Council on Historic Preservation. These exceptions apply to requirements for accessible routes (§F206.2) entrances (§F206.4), and toilet rooms (§F213.2). 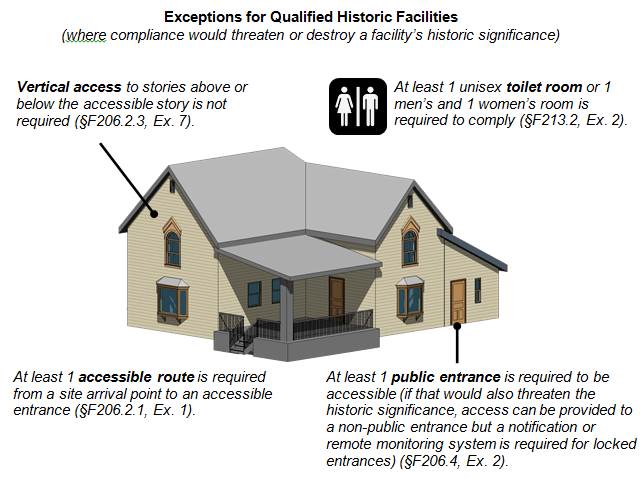 Existing facilities leased in whole or in part by federal agencies must meet a minimum level of access specified in the standards. These requirements apply when a new lease is negotiated, even when the space was previously occupied by a federal agency. Compliance is not required at facilities that are either leased: 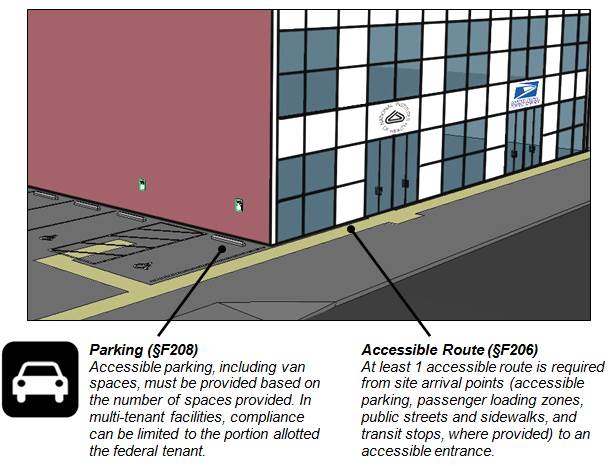 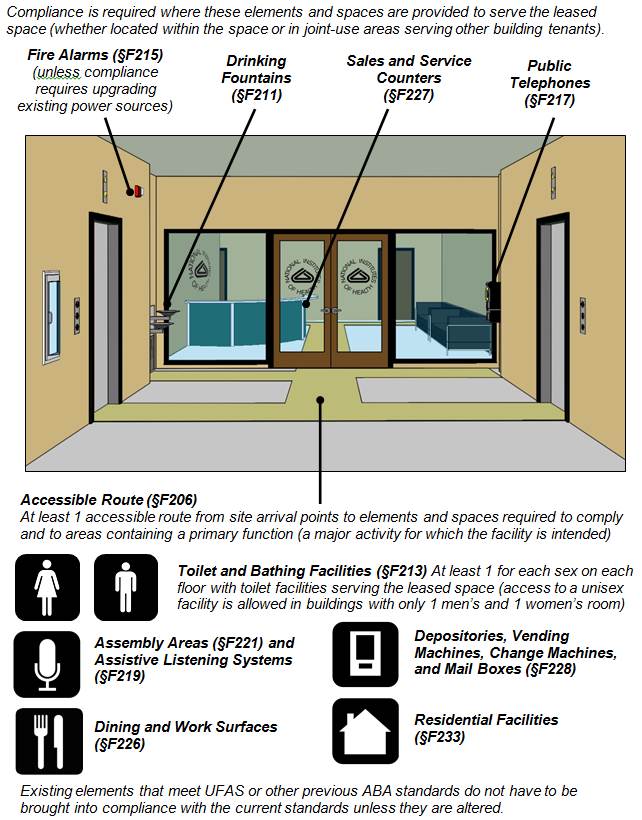 What requirements of the standards apply in an alteration?

Application of the standards in an alteration is determined by the scope of work and whether it involves areas containing a primary function. Altered elements or spaces must comply with relevant provisions of the standards except where compliance is technically infeasible. Where compliance is technically infeasible, compliance is required to the maximum extent feasible. If alterations are made to an area containing a primary function (a major activity for which a facility is intended), an accessible path of travel from the area to site arrival points, as well as the restrooms, telephones, and drinking fountains serving the area, must be made accessible as part of the work to the extent it is not “disproportionate” (more than 20% of the total cost).

How is “technically infeasible” determined in an alteration?

Determining “technical infeasibility” requires a site-specific assessment of constraints or complications in relation to the planned scope of work. The term, as defined in the standards (§106), is intended to encompass design, site, engineering or other constraints that prohibit compliance. Examples include work that would impact a facility’s structural frame or that would conflict with applicable codes or building requirements.

Do the standards apply to existing facilities that are not being altered?

The ABA Standards only address existing facilities where alterations or additions occur or where facilities are leased by federal agencies. However, the Rehabilitation Act (section 504) requires access to federally funded or conducted programs and may necessitate retrofits to existing facilities where no other alterations are planned. The obligation to provide “program access” can sometimes be satisfied operationally, such as by relocating a program, but retrofits to remove existing access barriers are often necessary.