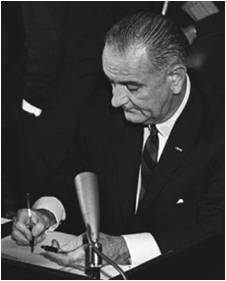 Congress passed the Architectural Barriers Act (ABA), the first federal law to address accessibility, to make federal facilities accessible to people with disabilities.  Unanimously approved on August 12, 1968, the law requires access to facilities designed, built, altered, or leased with federal funds.  By passing the ABA, Congress intended the federal government to set an example for state and local governments and for private industry.  President Lyndon Johnson characterized barriers to access as a failure on the part of government that perpetuated “cruel discrimination.”

Hugh Gallagher, an aide to Senator E.L. Bartlett of Alaska who introduced the ABA, helped draft the bill.  A wheelchair user, he had experienced firsthand barriers to access at many government buildings, including landmark museums along the Mall.  I wanted it to be simple, said Gallagher of the ABA, I wanted accessibility to be one of the items on the checklist of designers and builders.

Several years after the ABA became law, Congress observed that compliance was uneven, due in part to a lack oversight and of design standards for accessibility.  It determined that a central agency was needed to take charge of enforcing the ABA and to develop accessibility standards.  The concept of such an agency took shape as Congress considered the Rehabilitation Act of 1973, a measure that would require access to programs and activities funded by federal agencies and to federal employment.  A provision in the law (section 502) created the Access Board, originally named the Architectural and Transportation Barriers Compliance Board.  The Access Board was charged with ensuring federal agency compliance with the ABA and proposing solutions to the environmental barriers problems addressed in the ABA.  A Senate committee report stated that Barrier-free design in federal buildings and federally assisted projects is mandated in present law but has never been adequately enforced. . . . The Committee believes this Board can serve to accomplish this.

Staffing of the Access Board began with the appointment of its first Executive Director, James S. Jeffers, in 1975.  He in turn was responsible for filling key staff positions.  The following year, the Access Board helped the National Park Service design renovations to make major national monuments accessible during the Bicentennial celebration.  In other cooperative efforts, the Access Board published Access Travel: Airports in cooperation with the Airport Operators Council International and worked with Amtrak to design accessible railroad cars.  It also expanded public awareness efforts with a film, produced for a White House presentation and distributed nationally.  Also, a series of public service radio and television announcements promoting accessibility aired across the country. 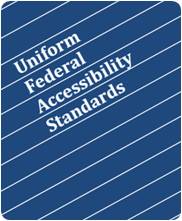 In 1982, the Access Board published accessibility guidelines for buildings and facilities subject to the ABA, the Minimum Guidelines and Requirements for Accessible Design.  This was the first comprehensive set of accessibility requirements established by the federal government.  Previously, the Access Board used voluntary consensus standards developed by industry to enforce the ABA.  The Access Board’s guidelines served as the basis for standards, the Uniform federal Accessibility Standards (UFAS), implemented by several designated agencies to enforce the ABA.  UFAS was jointly adopted in 1984 by the Department of Defense, the Department of Housing and Urban Development, the General Services Administration and the U.S. Postal Service.  It would serve as the enforceable ABA standard for more than 20 years.  Later under the ADA, its continued use by state and local governments would be permitted. 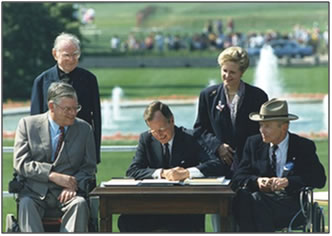 On July 26, 1990, President George Bush signed into law the Americans with Disabilities Act, a comprehensive measure to protect the rights of people with disabilities.  The ADA bans discrimination based on disability in the private sector and the state and local government sectors and requires access to programs and services, facilities, transportation, employment, and communication.

In this extraordinary year, said President Bush at a White House signing ceremony, we have seen our own Declaration of Independence inspire the march of freedom … It is altogether fitting that the American people have once again given clear expression to our most basic ideals of freedom and equality.  The Americans with Disabilities Act represents the full flowering of our own democratic principles. 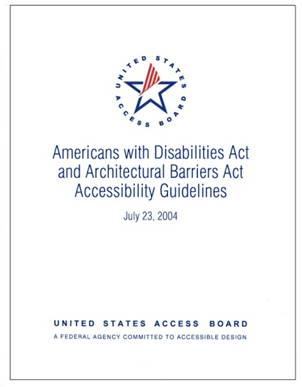 The Access Board published the ADA Accessibility Guidelines (ADAAG) on the first anniversary of the ADA, July 26, 1991.  Like UFAS, ADAAG contains detailed design requirements for accessibility in new construction and alterations.  On the same day, the Department of Justice adopted ADAAG as the basis of its enforceable standards, which made compliance with the requirements mandatory under the ADA.  The Access Board also implemented a toll-free hotline to handle questions on ADAAG and accessible design and instituted a program to provide training to the public.

In following years, the Access Board supplemented ADAAG to specifically address state and local government facilities, including courthouses and prisons (1998), children’s environments (1998), and recreation facilities, including play areas (2000 - 2002).  It also initiated rulemaking to address access to streets, sidewalks, trails, beaches, and picnic and camping areas.

1996 – Access Board Gains New Responsibilities under the Telecommunications Act

In February 1998, the Access Board issued the Telecommunications Act Accessibility Guidelines.  Structured as performance requirements, the guidelines address products and equipment, including input, output, operating controls and mechanisms, and product information and documentation.  They are enforced by the Federal Communications Commission, which is responsible for rules and policies to enforce the law.

To address barriers to access posed by information technology, Congress passed the Rehabilitation Act Amendments of 1998, which President Bill Clinton signed into law on August 7, 1998.  This measure strengthened Section 508 of the Rehabilitation Act by requiring access to electronic and information technologies procured by the federal government.  This mandate applies to all federal agencies when they develop, procure, maintain, or use such technologies to the extent it does not pose an undue burden.

The Act assigned the Access Board the responsibility for developing and keeping up to date accessibility standards that would be incorporated into the federal government’s procurement regulations.  The Access Board’s Section 508 Standards, which were published in December 2000, address access to the various types of technologies covered, including computers, hardware, software, websites, and electronic office equipment.

2004 – Access Board Updates the ADA and ABA Accessibility Guidelines

On July 23, 2004, the Access Board completed a comprehensive review and update of ADAAG.  It also jointly updated its ABA Accessibility Guidelines to establish a consistent level under both the ADA and the ABA.  The updated ADA and ABA Accessibility Guidelines were based largely on recommendations from an ad hoc advisory committee established by the Board.  The ADAAG Review Advisory Committee represented a cross section of stakeholders, including representatives from disability groups, the design profession, and building codes organizations.  The final document was further shaped by over 2,500 comments received from the public.  Provisions were updated so that the guidelines continue to meet the needs of people with disabilities and keep pace with technological innovations.  The Access Board coordinated its work extensively with model code groups and standard-setting bodies.  This resulted in a historic level of harmonization between the Access Board’s guidelines and model building codes, such as the International Building Code (IBC), and industry standards. 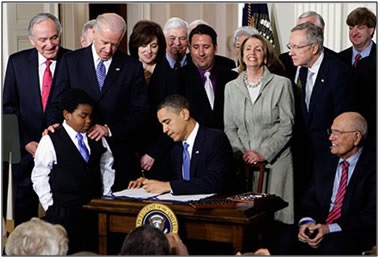 On March 23, 2010, President Barack Obama signed into law The Patient Protection and Affordable Care Act to reform and extend the provision of health care.  The law includes a provision to amend the Rehabilitation Act to address access to medical diagnostic equipment, including examination tables and chairs, weight scales, x-ray machines and other radiological equipment, and mammography equipment.  Under this amendment, the Board is authorized to develop access standards for medical diagnostic equipment in consultation with the Food and Drug Administration.  The standards address independent access to, and use of, equipment by people with disabilities to the maximum extent possible.