Pedestrian Access to Modern Roundabouts: Design and Operational Issues for Pedestrians who are Blind

Orientation and mobility techniques used by blind individuals at traditional intersections rely heavily on traffic sounds. When traffic signals and stop signs regulate traffic movements at intersections, the resulting breaks in traffic flow provide identifiable and predictable periods – gaps – during which pedestrians can cross. Such predictable breaks do not usually occur at roundabouts, and so pedestrians must make judgments about the speed and travel paths of approaching vehicles (and the duration of gaps between vehicles). It appears that sighted adults are generally able to safely make such judgments, although some pedestrians (e.g., those with cognitive impairments, children – see Figure 3) may have difficulty doing so. Research suggests that the selection of appropriate gaps at roundabouts is problematic for blind pedestrians at some roundabouts. 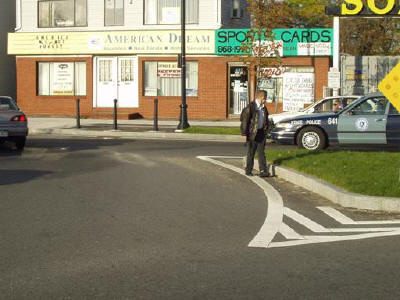 Traffic sounds at roundabouts can provide ambiguous cues. Circulating vehicles can mask the sounds of entering and exiting traffic, making it difficult to identify an appropriate time to cross. At exit legs, auditory information may not be adequate to reliably convey whether circulating vehicles will exit or continue around the roadway.

At entry legs, it may not be clear from auditory information whether a driver intends to yield to a waiting pedestrian.

While research has shown that driver- yielding rates increase at low speeds, many drivers do not yield to blind pedestrians at crosswalks (see Figure 4) and yielding behavior may be difficult to detect. 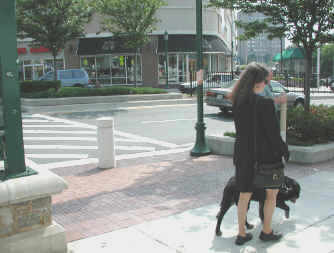 The curvilinear layout of roundabouts poses several challenges to blind pedestrians. One challenge is obtaining information about the location and direction of the crosswalk.

Another challenge is aligning the body with the crosswalk prior to crossing (see Figure 6). At traditional intersections, a common nonvisual technique for accomplishing this is to use traffic sounds to line up to face parallel to the traffic to one’s side (i.e., one’s ‘parallel street’ traffic). This technique is probably not useful at roundabouts. 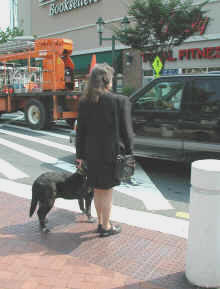 Figure 6. Crosswalk not aligned with approach

At some roundabouts, however, some of the nonvisual street-crossing methods used at traditional intersections may be appropriate. For example, it would appear to be appropriate to cross during the periods of ‘all quiet’ that occur at roundabouts where the traffic volume is very light (e.g., 1 lane roundabouts in residential areas) or where there are long periods during which there is no traffic (e.g., due to traffic signals at nearby intersections). However, as vehicles become quieter, this technique may be unsuitable at both traditional and roundabout intersections.

Roundabouts: An Informational Guide, published in 2000 by the Federal Highway Administration (FHWA), acknowledges the need for improvements in roundabout access for blind pedestrians.

“It is expected that a visually impaired pedestrian with good travel skills must be able to arrive at an unfamiliar intersection and cross it with pre-existing skills and without special, intersection-specific training. Roundabouts pose problems at several points in the street crossing experience, from the perspective of information access.

“Unless these issues are addressed by design, the intersection is ‘inaccessible’ and may not be permissible under the ADA…[M]ore research is required to develop the information jurisdictions needed to determine where roundabouts may be appropriate and what design features may be appropriate for the disabled, such as audible signalized crossings.”

Title II of the Americans with Disabilities Act (ADA) requires that new and altered facilities constructed by, on behalf of, or for the use of state and local government entities be designed to be readily accessible to and usable by people with disabilities (28 CFR 35.151).