Pedestrian Access to Modern Roundabouts: Design and Operational Issues for Pedestrians who are Blind 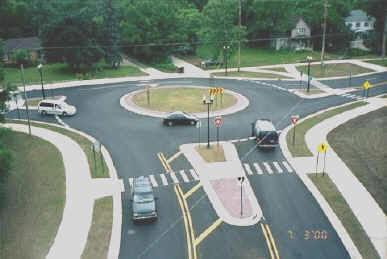 Roundabouts are replacing traditional intersections in many parts of the U.S. This trend has led to concerns about the accessibility of these free-flowing intersections to pedestrians who are blind and visually impaired. Most pedestrians who cross streets at roundabouts use their vision to identify a ‘crossable’ gap between vehicles. While crossing, they visually monitor the movements of approaching traffic and take evasive action when necessary. Blind pedestrians rely primarily on auditory information to make judgments about when it is appropriate to begin crossing a street. Little research has been conducted about the usefulness of such non-visual information for crossing streets at roundabouts. Recent research sponsored by the Access Board, the National Eye Institute, and the American Council of the Blind suggests that some roundabouts can present significant accessibility challenges and risks to the blind user (for a link to an abstract of this research, see the Resources section at the end of this document). This bulletin:

There are an estimated 40,000 modern roundabouts worldwide, and more than 200 have been constructed in the United States. Most of these have been built within the last 5 years. Many jurisdictions are now considering roundabouts to improve vehicle safety, increase roadway capacity and efficiency, reduce vehicular delay and concomitant emissions, provide traffic-calming effects, and mark community gateways. 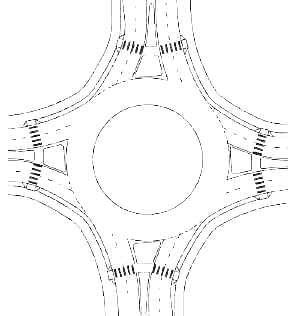 Roundabouts have raised or painted splitter islands at each approach that separate the entry and exit lanes of a street. These splitter islands are designed to deflect traffic and thus reduce vehicle speed. Splitter islands also provide a pedestrian refuge between the inbound and outbound traffic lanes.

Roundabout design in the U.S. has not yet been standardized, although several types have been defined in industry publications. Engineers use a variety of design techniques, mostly geometric, to slow vehicles as they approach or exit a roundabout. Differing design practices in Europe and in Australia continue to influence U.S. engineers as they refine design approaches for application in urban, suburban, and rural areas.

Studies conducted in western Europe, where roundabouts are common, and in the U.S. have generally found that roundabouts result in less severe vehicular crashes than more traditional intersections. This reduction in the rate of serious vehicular crashes is the most compelling reason cited by transportation engineers for the installation of roundabouts. Roundabouts increase vehicular safety for two main reasons: 1) they reduce or eliminate the risk arising at signalized intersections when motorists misjudge gaps in oncoming traffic and turn across the path of an approaching vehicle; and 2) they eliminate the often-serious crashes that occur when vehicles are hit broadside by vehicles on the opposing street that have run a red light or stop/yield sign.

The differences between modern roundabouts and traditional intersections controlled by traffic signals and stop signs have important implications for blind pedestrians. While some of these implications are not yet well understood, they must be considered by any transportation engineer or planner whose goal is to create an accessible pedestrian environment.

The techniques and cues used by blind pedestrians crossing at traditional intersections are diverse and vary by location and individual. Many blind pedestrians have received instruction in using these techniques from orientation and mobility (O&M) professionals. In the most common technique for crossing at fixed-time signalized intersections, pedestrians who are blind use traffic sounds to align themselves properly for crossing and then begin to cross when there is a surge of through traffic next to and parallel to them. This occurs at the onset of the walk interval, when the traffic signal changes in the pedestrian’s favor. Cues that can be used for identifying that a street is just ahead, and for determining when to cross, include traffic sounds, the orientation and slope of curb ramps, textural differences between the street and sidewalk, detectable warnings underfoot, locator tones at pedestrian pushbuttons, and audible or vibrotactile information from accessible pedestrian signals (APS).

Key street-crossing tasks for the blind pedestrian include:

When traffic sound cues are absent (e.g., when there are no cars on the street parallel to the pedestrian’s line of travel, and thus no auditory cue that the signal has changed) or unpredictable (e.g., when the intersection is of a major and minor street, and traffic signals are actuated by vehicles), information may be insufficient for determining the onset of the walk interval. In such situations, APS systems may be necessary. New guidance on the use of APS appears in the 2000 edition of the Manual of Uniform Traffic Control Devices (MUTCD).