The park manager conducted a series of surveys of play surface users within 1 month of installation. Approximately 60 children in grades 4 and 5 (ages 9 to 11) were divided into three groups and then invited to play on each test surface. Feedback was solicited on features while the children performed unchoreographed activities, such as bouncing, running, falling, rolling, and jumping. After playing for several minutes on each surface, the children were asked to stand on the surface they preferred. In all three groups of children, more than 90% chose the urethane Vitri-Turf SEWF surface. The remainder had equal preference for the untreated EWF (5%) and the polymer emulsion Soil-Sement (5%) SEWF. The major comment was that the users liked the stiff bounce obtained from the Vitri-Turf and disliked the attenuation of the EWF and the Soil-Sement SEWF.

During the 10-month period of the test, firmness and stability of the SEWF surfaces were measured with the rotational penetrometer (Figs. 12 and 13, respectively). The Soil-Sement SEWF showed poor binding early in the exposure period, compared to the unsurfaced EWF. Only the Vitri-Turf SEWF showed acceptable performance for accessibility during the entire trial installation. 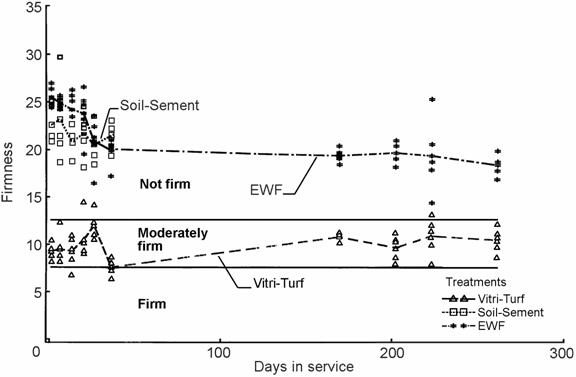 Figure 12— Firmness of Play playground surface , as firmness measured with the by Rotational rotational Penetrometer penetrometer, over the nine 9- month installation. 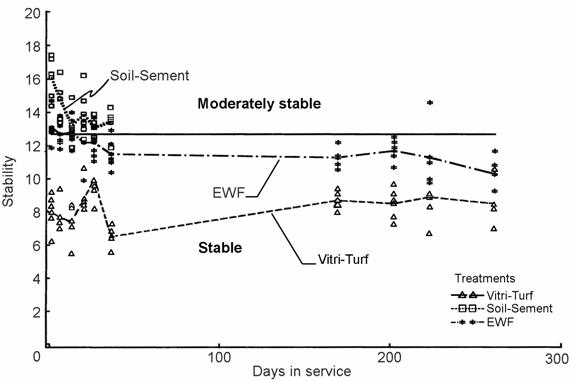 Figure 13— Stability of playground surface, as measured by rotational penetrometer, over 9-month installation.

Impact testing (ASTM F1292) was conducted on the Vitri Turf SEWF and the unsurfaced EWF 7 weeks after installation. At this time, the Soil-Sement SEWF had not yet cured or cross-linked because of the rainy weather (see following section on durability). Average g readings for the second and third drop tests were 92 for Vitri-Turf and 83 for EWF. Average HIC readings were 507 for Vitri-Turf and 413 for EWF. These values are excellent for a play surface, which must have g readings of less than 200 and HIC readings of less than 1,000.

Measures of surface durability are usually quite subjective unless the loss of durability represents a dramatic failure. This was the case for the installation of the Soil-Sement SEWF. Curing, as evidenced by stiffening of the SEWF mixture, was slow and incomplete. Based on our experience with a previous exterior installation (Laufenberg and Wi-nandy 2003), we assume that individual particles of this material had bonded poorly. Within 3 weeks of installation, the Soil-Sement SEWF showed detachment of top surface particles from the overall layer. The lack of stability and firmness of the Soil-Sement surface was reflected in the rotational penetrometer readings as well. When the impacttests were run (7 weeks after installation), the Soil-Sement surface had deteriorated and its performance was similar to that of unsurfaced EWF. Although we had intended to re-place the Soil-Sement SEWF, the cold weather of fall and winter interceded, followed by a record-breaking wet spring and summer, which further precluded re-installation. In retrospect, the use of Soil-Sement may indeed be acceptable, but the conditions for such an installation would need to be fairly dry with relatively warm periods. Some dry and warm climates may lend themselves to the use of this binder. The wet and cool climate in southwestern Wisconsin during the fall 2003 to spring 2004 season was not conducive to the installation or curing of Soil-Sement.

The durability of Vitri-Turf SEWF with exposure to weather was good and reflected similar experience with a prior exterior installation (Laufenberg and Winandy 2003). The integrity of the Vitri-Turf SEWF surface was maintained for the first 9 months. We then found that the edge of the Vitri-Turf SEWF had been lifted and the material torn off in large (0.2- to 0.8-m2, 2- to 8-ft2 ) plates and tossed about on the play surface (Fig. 14). This damage occurred at the unprotected and unsecured interface with the unstabilized EWF. It did not occur at the edge of the playground where the Vitri-Turf had bonded to the wood landscape ties that surround the area. Differential settlement of the Vitri-Turf SEWF and the EWF (due to extensive rainfall) was approximately 38 mm (1.5 in.). As a result of the damage, the Vitri-Turf SEWF was removed 9 months after installation. The material showed little evidence of fungal propagation or insect infestation. The thickness of the removed material, measured at 24 locations, was an average of 30.4 mm (1.2 in.). 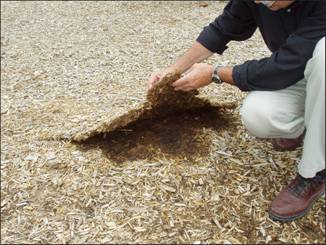 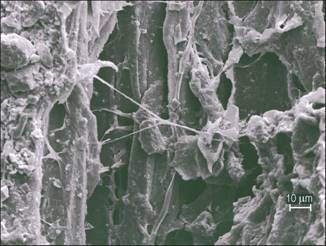 Figure 15—Hyphal growth on surface of wood chip from biodeterioration sample. Fungal growth was present at all depths of EWF surface after 6 months.

To test the durability of the EWF playground system, the biodeterioration samples were removed from various depths of the unsurfaced portion of the playground 6 months after installation. The samples were cleaned, ovendried, and re-weighed; weight loss ranged from 1.4% to 1.9%. These values are consistent and reasonable for EWF. In spite of 4 months of freezing conditions above the surface, fungal hyphae were present at all levels (Fig. 15). If the EWF surface is maintained, further results will be gathered from this site at 6-month intervals.

The following summary of costs and time estimates is not meant to be definitive. Markup for contractors or other over-head and profits is not included. No costs were incurred for edging since treated wood edging was already installed. The estimates do not include the significant amount of personnel time required to remove the sand from the playground.

Installation of the two surface treatments was completed during one work day. Approximate effort for installation of 300 ft2 of each material (600 ft2 total) was 24 h (four people for 6 h).

Follow manufacturer’s instructions for storage and handling of the binder. Binder materials must be stored indoors in cool dry storage out of sunlight. Observe recommended limits on binder shelf life as reactivity will diminish after that time. Read material safety data sheets carefully prior to opening containers. Wear protective clothing and eye gear at all times. The EWF should be less than 30% moisture content for correct absorption and curing of SEWF.

Mixing of Binder With EWF

1. Mix Vitri-Turf binder with EWF at ratio of 77/23 by weight. This is approximately 1.25 gal of Vitri-Turf binder to 1.8 bushels of EWF (depending on density of EWF
particles).
2. Use a mechanical drum mixer to mix binder and EWF. To mix a small batch for repairs, use a trough and hoe. Be sure that EWF particles are thoroughly coated. Adequate mix-ing takes about 2 min in a typical mortar or cement mixer. Check the mixer at the end of each mix to ensure that binder and fine wood particles are not accumulating on the paddles or drum.

1. Transport SEWF mixture to site in a wheelbarrow. Dump mixture onto site and apply binder–EWF mixture to a thickness (uncompacted) of about 75 mm (3 in.) using a screed bar or rake.
2. Compact and smooth the surface using a large trowel or a 1.2-m by 1.2-m by 16-mm (4-ft by 4-ft by 5/8-in.) piece of plywood covered with a heavy-mil sheet of polyethylene as a release. If the material sticks, lubricate the trowel or
plywood with kerosene, diesel fuel, or soapy water. Do not saturate the surface with these lubricants. After compaction, thickness will be approximately 40 mm (1.6 in.).
3. Apply a moderate downward pressure onto the surface so that the mixture compacts tightly. If plywood is used to compact the surface, a 90-kg (200-lb) person stepping on the four quadrants of the panel should provide adequate compaction.
4. Allow the surface to cure for a minimum of 24 h.

Clean all tools and surface spots immediately with diesel fuel prior to drying. Once the binder has dried it will be extremely difficult to remove from tools, surfaces, or hands.