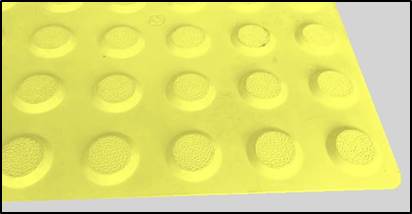 Detectable warnings are a distinctive surface pattern of domes detectable by cane or underfoot that alert people with vision impairments of their approach to street crossings and hazardous drop-offs. They are used to indicate the boundary between pedestrian and vehicular routes where there is a flush instead of a curbed connection. Detectable warnings also indicate unprotected drop-offs along the edges of boarding platforms at transit stations and stops.

Standards issued under the Americans with Disabilities Act (ADA) include requirements for detectable warnings, as do similar standards issued under the Architectural Barriers Act (ABA) for federally funded facilities. Specifications in the ADA Standards and the ABA Standards address spacing, height, and diameter of truncated domes to ensure a distinctive yet uniform texture to the warning surface (§705). They also require that detectable warning surfaces contrast visually with adjacent walking surfaces either light-on-dark, or dark-on-light. Detectable warnings are required on curb ramps at certain transportation facilities and at rail station boarding platforms with unprotected drop-offs. 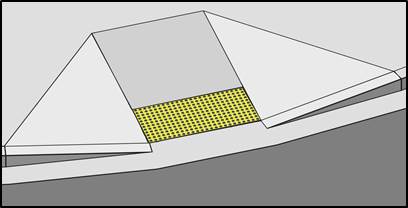 Other types of facilities covered by the ADA are subject to standards issued by the Department of Justice (DOJ). Neither DOJ’s ADA Standards (2010) nor the ABA Standards, which apply to federally funded facilities, require detectable warnings on curb ramps. However, the Access Board is developing new guidelines that will address access to public rights-of-way, including detectable warnings on curb ramps. 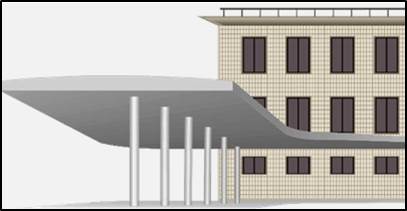 In rail stations, platform boarding edges not protected by platform screens or guards must have detectable warnings 24 inches wide along the full length of the public use area of the platform (§705.2 and §810.5.2). This is required by both the DOJ and DOT ADA Standards and by the ABA Standards. 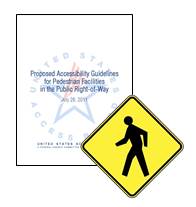 The Access Board is developing new accessibility guidelines for public rights-of-ways. These guidelines will address newly constructed and altered public streets, sidewalks, and shared use paths covered by the ADA and, in the case of those that are federally funded, the ABA. In 2011, the Board released for public comment proposed guidelines which address pedestrian access to sidewalks and streets, including crosswalks, curb ramps, street furnishings, pedestrian signals, parking, and other components of public rights-of-way.

The proposed guidelines would require detectable warning surfaces to be at least two feet deep in the direction of pedestrian travel and specify their width and placement at these locations (§R305). Specifications for dome size and spacing and for visual contrast are consistent with those in the ADA and ABA Standards.

The Board is currently finalizing the guidelines for public rights-of-way and shared use paths based on the public comments received on the proposed version. The proposed rule offers an interim source of guidance on access to public rights-of-way, including the provision of detectable warnings, until the final guidelines are published. Once finalized, the guidelines, though usable, will not actually be mandatory until implemented as enforceable standards by other agencies, including DOT and DOJ. 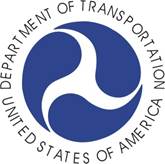 The Federal Highway Administration (FHWA) also encourages the provision of detectable warnings on curb ramps and blended transitions in projects it funds. This policy is established in a FHWA memorandum.

Further guidance on accessible public rights-of-way and detectable warnings is available from the Access Board at 1-202-272-0080 (voice/TTY) or row@access-board.gov.