Canyon Lake is a popular recreation destination in the Hill Country of Texas located between San Antonio and Austin. Created by construction of the Canyon Dam on the Guadalupe River, the lake and surrounding parkland is a favorite site for swimming, boating, fishing, as well as camping and hiking. A prized feature is a service road atop the dam which, although used for dam maintenance, is also enjoyed by many in the area as a scenic walkway because of the lakeside vistas it offers.

In 2017, the Access Board received a complaint about the accessibility of the Canyon Dam’s service road. The complaint was filed under the Architectural Barriers Act (ABA) which requires access to facilities funded by the federal government. The Board is responsible for enforcing the ABA through the investigation of complaints. The complaint alleged that security fencing at the dam made the road inaccessible because pedestrian gates lacked adequate clearance for wheelchair access. In response, the Board opened an investigation with the U.S. Army Corps of Engineers, which controls the dam and park areas around the lake. The Board found that the ABA applied to the site and that the pedestrian gates did not meet the applicable accessibility standard.

The Army Corps of Engineers acknowledged that the pedestrian gates were too narrow for many wheeled mobility devices. They were designed to prevent passage of motorized devices as a security precaution following 9/11. The Corps argued that the service road was not intended as a recreational trail and that public access was permitted as a courtesy to the community. It closed the road to the public and stated that the narrow gates also were intended to prevent wheelchair traffic on the road which lacked barriers or edge protection. The closure sparked a strong outcry from local residents who launched the Dam Community Alliance as a grassroots campaign to reopen the road to the public. Led by Comal County Commissioner Jen Crownover and composed largely of private citizens, the Alliance lobbied the Corps to reverse its decision. 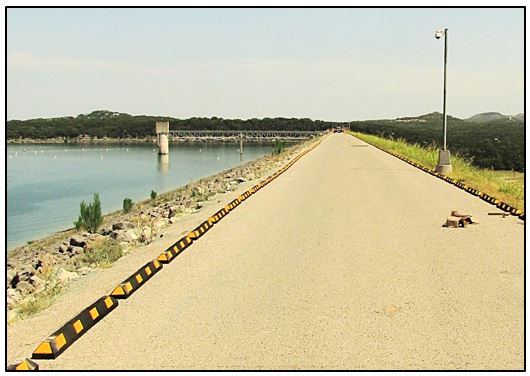 The Corps eventually agreed to reopen the service road if the community sponsored safety improvements for pedestrians. In response, local supporters, the Water-Oriented Recreation District of Comal County, and the Guadalupe-Blanco River Authority donated funds to purchase over 2,000 wheel stops that the Corps installed as edge protection along the road. In addition, the Canyon Lake High School Agricultural Mechanics Team volunteered its time and talents to design, build, and install a new pedestrian entry gate that is accessible while maintaining the required level of security. Other organizations also aided this effort, including the Comal Trails Alliance and three local Chambers of Commerce.

Upon completion of the accessibility and safety improvements, the Corps has re-opened the road to the public. The Corps, the Dam Community Alliance, and the local Chambers of Commerce held a celebration of the re-opening on August 27.

“This project is a great example to other communities of how concerned citizens, local organizations, schools, and government agencies can work together constructively to achieve positive results that can be enjoyed by everyone,” Commissioner Crownover stated. “Everyone rose to the occasion and it was wonderful to welcome everyone back.” The case also illustrates the importance of ensuring that local recreational sites are equally accessible to everyone.

The ABA, the first federal law to address accessibility, applies to facilities designed, built, or altered with federal money or leased by federal agencies. Visit the Board’s Enforcement page for further information on the law and how to file a complaint.